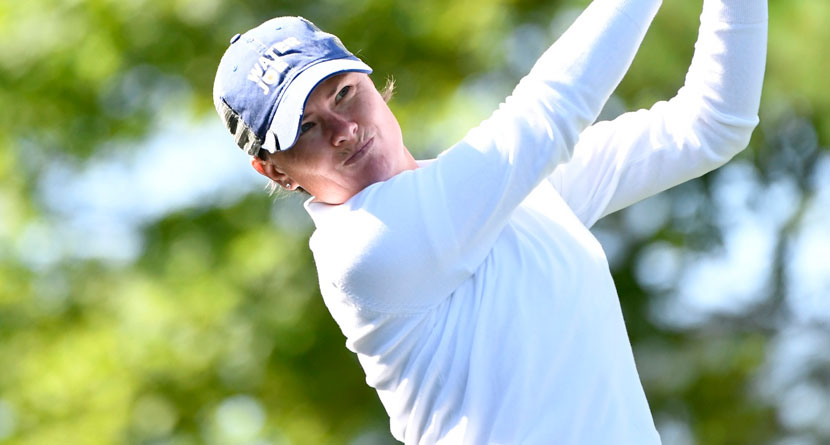 A little-known LPGA Tour pro has come under serious scrutiny after she withdrew from this past week’s CP Women’s Open under dubious circumstances.

South African Lee-Anne Pace may not be a household name, but the No. 251-ranked player in the world has put herself into a very envious position as she leads the LPGA Tour’s Aon Risk Reward Challenge.

Identical to the PGA Tour’s version, the season-long competition “highlights the game’s best players as they navigate some of the most strategically challenging holes on tour.” Each tournament, players will have their best two scores from the event averaged on the designated hole with the winners having the best average score to par at the end of the regular season.

Pace entered last week’s CP Women’s Open in the lead of the Challenge at -0.818, however, she withdrew mid-way through her first round after making a quadruple-bogey 9 on the Risk Reward hole, the par-5 14th. She subsequently withdrew after hitting her tee shot on the next hole, meaning her 9 would not count towards her Aon Risk Reward Challenge average.

Lee-Anne Pace says her WD after putting up a big number on the Aon Risk Reward Challenge hole is legit: https://t.co/aCNVI1HICl pic.twitter.com/nB11NKBW75

“I know what it looks like, but I can guarantee that’s not the case,” Pace told GolfChannel.com. “It’s all legitimate. It just happened to happen there, on that hole, Pace said. “I understand what people are going to think. They’re going to think what they think, but I feel, under the circumstances, I did the right thing, to not keep playing with a bad back.”

Pace was 9-over par at the time of her withdrawal, and likely to miss the cut, which meant the quadruple-bogey would have counted as one of her two scores in the Challenge, essentially dooming her chances at the million-dollar award.

While fans have become numb to the ridiculous purses played for on a weekly basis on the PGA Tour, it shouldn’t be assumed that the women on the LPGA Tour are swimming in money. Pace currently sits at 133rd on the LPGA Tour money list having made $43,433 so far this season.

Were she to win the $1 million, her de facto earnings would move the 38-year-old veteran to 7th on the LPGA Tour money list.

Pace has completed 35 rounds on the LPGA Tour this season; she needs to play in 40 to be eligible to win the Aon Risk Reward Challenge. There are eight more events left on the LPGA Tour schedule for 2019, wrapping up with the CME Group Tour Championship from November 21-24.