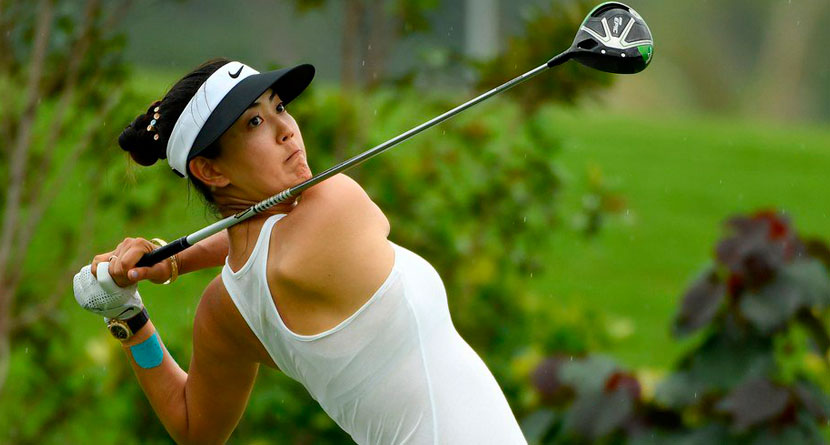 The LPGA Tour made some waves on Friday of the U.S. Women’s Open by announcing that the Tour would be enforcing a much stricter dress code on its members effective as soon as this week’s tournament comes to a close.

During an already-controversial week at Trump Bedminster Golf Club, the LPGA announced in an email to its members that certain pieces of clothing that have become more and more commonplace on the fairways of the top women’s golf tour in the world would no longer be allowed.

Ashley Mayo of GolfDigest.com obtained a copy of the email and reported on its contents.

Professional golf has become increasingly progressive when it comes to all-things fashion. Rickie Fowler regularly wears joggers with high tops; Nike started making polos without collars; and the European Tour allows its golfers to wear shorts during practice rounds. So it’d seem like a curious time for any of golf’s governing bodies to enforce a stricter dress code that limits an athlete’s style options.

But that’s exactly what the LPGA Tour has done.

Starting on Monday, July 17, the LPGA Tour will enforce a dress code policy that cracks down on athletic wear. In an email directly to Tour players on July 2, LPGA Player President Vicki Goetze-Ackerman outlined a list of items that will no longer be allowed. The email was marked as “important” and had a subject line that read, “Updated Policy to begin in Toledo.” Here’s the new dress code as it appeared in the email:

-Plunging necklines are NOT allowed.

-Leggings, unless under a skort or shorts, are NOT allowed

-Length of skirt, skort, and shorts MUST be long enough to not see your bottom area (even if covered by under shorts) at any time, standing or bent over.

-Appropriate attire should be worn to pro-am parties. You should be dressing yourself to present a professional image. Unless otherwise told “no,” golf clothes are acceptable. Dressy jeans are allowed, but cut-offs or jeans with holes are NOT allowed.

-Workout gear and jeans (all colors) NOT allowed inside the ropes

-Joggers are NOT allowed

The harsh language here — capitalization of every NOT; dated phrases like “plunging necklines” and “bottom area” — begs the question: Who on the LPGA Tour began dressing offensive enough to drive the implementation of this new policy?

Goetze-Ackerman went on to explain that it’s an LPGA Tour player’s “job” to notify her clothing sponsors of this new policy, and that “penalties for violating the dress code will be a $1,000 and it will double with each offense.”

When we asked the LPGA to comment, Heather Daly-Donofrio, the tour’s chief communications and tour operations officer, offered the following statement: “The dress code requires players to present themselves in a professional manner to reflect a positive image for the game. While we typically evaluate our policies at the end of the year, based on input from our players, we recently made some minor adjustments to the policy to address some changing fashion trends. The specifics of the policy have been shared directly with the members.”