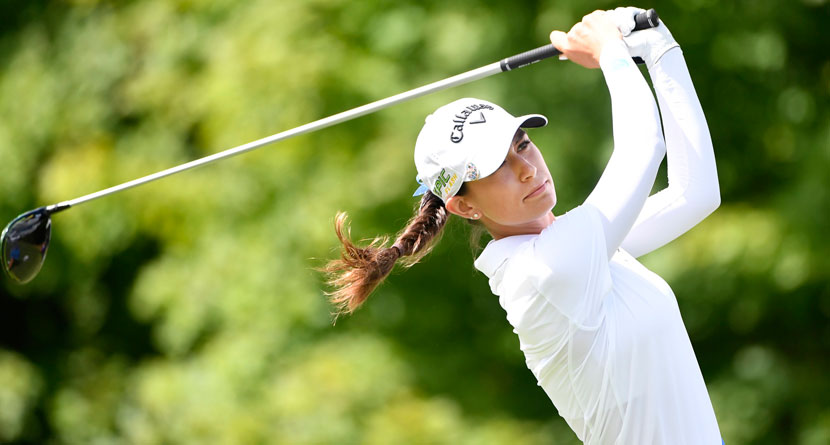 In the latest edition of “Rules You Didn’t Know Existed,” an LPGA Tour pro had the unthinkable happen to her this past weekend at the Indy Women in Tech Championship at Brickyard Crossing Golf Club in Indianapolis, Indiana.

Cheyenne Knight was playing the Brickyard’s signature hole, the par-4 16th — which happens to be situated on the infield of the Indianapolis Motor Speedway — when she piped a drive right down the middle of the 370-yard par-4.

Left with an 8-iron into the green, Knight pulled her club and began her pre-shot routine some 10 feet behind her ball, according to Golfweek.com’s Beth Ann Nichols. As Knight took a practice swing, she took an accidental divot that flew directly at her ball, hitting and moving it some five inches forward.

She thought immediately of a popular social media post the PGA Tour had posted of Hudson Swafford doing the same thing years earlier.

Knight called over a rules official and was given the bad news: under Rule 9.4, she received a one-shot penalty and had to replace the ball in its original position.

“They’ve changed every other rule, but they don’t change that rule?” Knight vented after the round.

The penalty resulted in her only bogey of the day, which she offset with one birdie for a final-round of even-par 72 and a T-61 finish. However, for Knight, every stroke and dollar counts as she tries to avoid a return trip to LPGA Tour Qualifying School.

Currently, Knight is in 120th place on the season-long money list with $71,346 in official earnings. She expects to need a top-10 finish at this week’s Volunteers of America Classic in Texas, but if she comes up just short, she knows where at least one shot was lost.

“If next week I have a really good finish and I come up 1,000 short, me hitting that divot is costly,” she said.

The Volunteers of America Classic is the last full-field event of the LPGA Tour season with only the top-80 on the money list earning entry into the Tour’s Asian Swing. Players positioned Nos. 101-150 on the Money List will be forced to return to the final stage of LPGA Q-School in order to retain their cards.