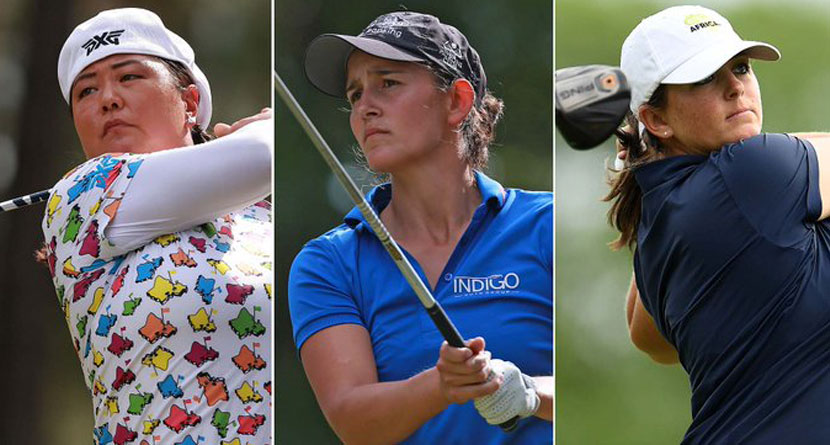 The gauntlet that is the LPGA Tour Q-Series already has enough drama built into it, but something that LPGA Tour veteran Christina Kim witnessed during the sixth round of the final stage added some controversy to an already stress-filled event.

Weber was hitting her shot and unaware of what was going on, but her caddie, Jacqueline Schram, motioned back to Dye and confirmed that she was hitting an 8-iron, a breach of Rule 10-2.

The rule states, “During a round, a player must not give advice to anyone in the competition who is playing on the course, ask anyone for advice, other than the player’s caddie, or touch another player’s equipment to learn information that would be advice if given by or asked of the other player (such as touching the other player’s clubs or bag to see what club is being used).”

Christina Kim noticed a rules violation involving two of her fellow competitors and called them on it at LPGA Q-Series: https://t.co/UMtDGEh88v pic.twitter.com/SlyKHwLB4h

Players are allowed to look into a competitor’s bag to see what club is missing, but actively seeking advice or confirmation is against the rules. Kim waited until the end of their round — another 10 holes — to bring up the infraction to the players and a rules official.

According to Golfweek.com’s Beth Ann Nichols, LPGA officials took more than an hour to deliver their decision, which ultimately penalized both Dye and Weber two strokes. Weber was penalized as a result of her caddie violating the rule.

“I’m gutted for the other player who was over her shot, ball in air and had no idea what was going on,” Dye told Nichols. “By no means was I trying to cheat.”

“I have just seen so many caddies and people do it,” Schram, the caddie, said. “It was just a subtle gesture that I didn’t think twice about.”

The whole saga was made even messier by Kim’s choice to broach the topic on Twitter, posting cryptically after the round.

The entire issue played out on social media, which brought attention to Dye and Weber, resulting in the former calling Kim’s decision to blast things over social media “unprofessional.”

As it played out, Kim secured her playing privileges over the next few rounds while both Dye and Weber failed to do so. Weber shot an 82 the following round, which effectively ended her chances of gaining a Tour card.

“It affected me way too much,” said Weber. “It shouldn’t have. That’s absolutely, 100 percent on me.”

Dye, on the other hand, missed her card by only a few strokes. Coming to her final hole of the tournament, Dye needed to make a hole-in-one, but pulled her shot into the water, made a double bogey and ended up missing out on her card by four strokes.