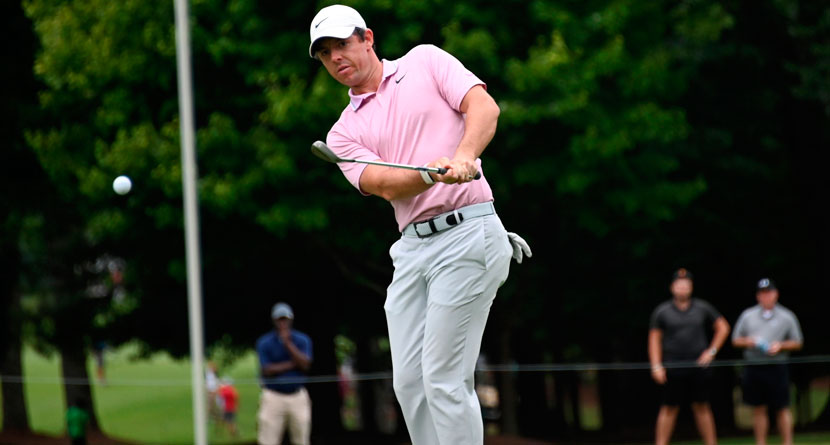 Golf has always been a game of what-ifs, could-haves, would-haves and should-haves, but when $15 million are on the line, those hypotheticals can get very pricey.

For Rory McIlroy on Sunday at the Tour Championship, he had done his part over the first seven holes of the final round to put himself in position to win his second FedEx Cup.

Putting a bow on his third-round 68 in the morning, McIlroy entered the final round a shot back of his playing partner, Brooks Koepka. When Koepka found trouble on the seventh hole and made double, McIlroy’s birdie resulted in a three-shot swing that gave McIlroy the lead, but it was nearly short-lived.

Piping a drive down the par-4 8th hole, McIlroy yanked his 130-yard wedge shot left of the green, which is guarded by water. However, by the grace of the golf gods, McIlroy’s caroming ball rolled into a sprinkler cover, which popped the ball up, took off much of its momentum and kept it dry.

Luck of the Irish. ?

Still, with no picnic ahead — Justin Rose made quadruple-bogey from the same spot earlier in the day — McIlroy adroitly got up-and-down for par.

Wowwww what a break. That sprinkler box might be worth about $15 million to Rory by the end of today.

McIlroy added all the cushion he would need over the next five holes, making back-to-back birdies on Nos. 12 and 13 to reach 18-under par. Although he gave both birdies back on Nos. 14 and 15, neither Koepka nor Xander Schauffele were able to put any serious pressure on McIlroy.

He closed the door with birdies on the final two holes to win by four shots and earn the $15 million .

A year after McIlroy was the sideshow to Tiger Woods’ triumph at East Lake and a month after Koepka dusted him in the final round of the WGC-FedEx St. Jude Invitational, the 31-year-old was happy to be on the other side of the coin.

“To play like that alongside Brooks and get the win, win the FedExCup, yeah, it’s awesome,” McIlroy said. “You know, it’s amazing how different things can be in a year.”