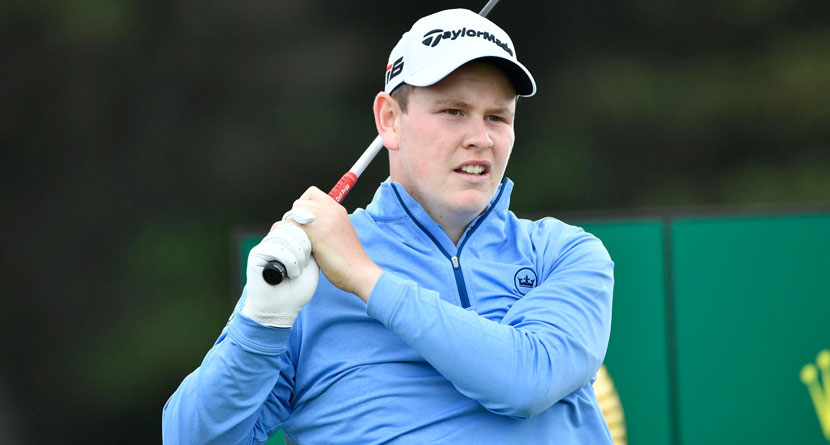 Open Championship rookie Robert MacIntyre didn’t allow his inexperience in major championships stop him from telling off one of his playing partners during their walk down the 18th hole at Royal Portrush on Friday.

Playing alongside American Kyle Stanley, MacIntyre told Martin Dempster of The Scotsman that he had some choice words for the two-time PGA Tour winner after a second errant tee shot of the round hit a spectator without Stanley yelling the accustomed warning of “fore!”

Stanley’s wayward drive on the 17th hole at the Open was heading straight for the gallery, striking MacIntyre’s caddie’s mother.

“Coming down the last I wasn’t happy with what had happened on the 17th,” MacIntyre said. “My playing partner doesn’t shout ‘fore,’ his ball goes into the crowd, we’re shouting ‘fore’ as the ball is coming into the crowd. He’s just standing watching it. And people didn’t have enough time to react when we shouted.

“It hit (caddie Greg Milne’s) mom. So I told him how it was. I said I wasn’t happy and he didn’t really like my response. He’s the only one I’ve seen do that. It was straight into the crowd. It was into the crowd from the word go. And we’re expecting him to shout fore. She’s all right, I think, but it’s not what you want.”

Earlier this year, the PGA Tour sent out a memo to its players imploring them to shout, while noting that indicating physically when they’ve hit a wayward shot to warn fans on the ground is not sufficient.

“Injuries to spectators are a serious concern to the PGA Tour. Members are reminded that the use of the word ‘fore’ is the traditional and expected warning/etiquette when there is a danger of hitting someone,” the memo read. “Simply indicating the direction of the ball by pointing the club is not enough of a warning. Shouting ‘fore’ gives the person ample time to cover up and protect themselves from the errant shot.”

Tour reminds players in a memo to yell “fire” after wayward shots. pic.twitter.com/qIGU8qPsEi

“Shout ‘fore,'” MacIntyre continued. “That ball is going straight into the crowd, you know from the word go it’s going into the crowd. Just shout. We shouted, me and (other playing partner Andrew “Beef” Johnston), as it was coming down. They don’t have time then. It’s too late and people are diving out of the way of things. They should have more time. It’s on the (player information) sheets, it’s on everything, you shout ‘fore.'”

MacIntyre and Stanley made the cut at 2-under par and even par, respectively, while the Johnston missed by one.