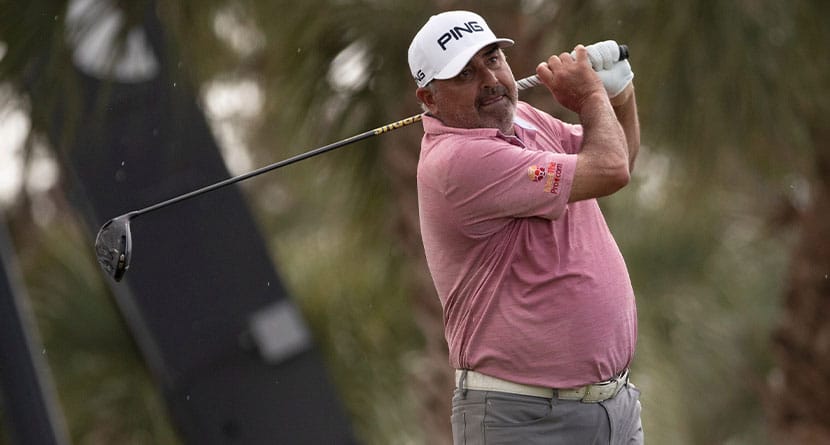 Two-time major champion Angel Cabrera was extradited from Brazil to Argentina on Tuesday to face charges of assault, theft, illegal intimidation and repeated disrespect to authorities.

The winner of the 2007 U.S. Open and 2009 Masters was arrested in January in an upper-class area of Rio de Janeiro by Brazil’s federal police, according to a report from the Associated Press.

His decision to compete in nine events on the PGA Tour Champions in 2020 triggered prosecutors in Cordoba to issue an international arrest warrant as terms of his investigation required the 51-year-old to request permissions from Argentine authorities before traveling to the United States.

Cabrera, 51, was handed over to Argentine authorities at a border bridge in the city of Foz do Iguacu on Tuesday, Brazilian federal police said. He will be transported on June 9 to Cordoba, where he will face trial. The trial is expected to begin in July.

PICTURED: Handcuffed US Open and Masters champion Angel Cabrera is extradited from Brazil to his native Argentina to face charges of assault, theft and intimidation https://t.co/jxg6E7eQz8

Cabrera’s former wife, Silva Rivadero, filed two charges against the golfer in January, according to the AP report. Another former partner, Cecilia Torres claimed Cabrera punched and threatened her and attempted to run her over with his car in 2016. Micaela Escudero, another former partner, joined the case as well.

Cabrera had spent months on the run from an Argentine case involving assault claims filed by former girlfriend, according to the AP, until his repeated trips to the U.S. resulted in him being “red flagged” by Interpol.

“The accusations come from long ago,” he told TV Todo Noticias, “and he was not in jail because the facts attributed to him are insignificant. They are light injuries.”

In a recent interview, Torres Mana painted a different picture of the star golfer.

“We have to stop him so he leaves us at peace. He thinks you are his for the rest of your life and that you have to take the attacks and constant humiliation,” she said.