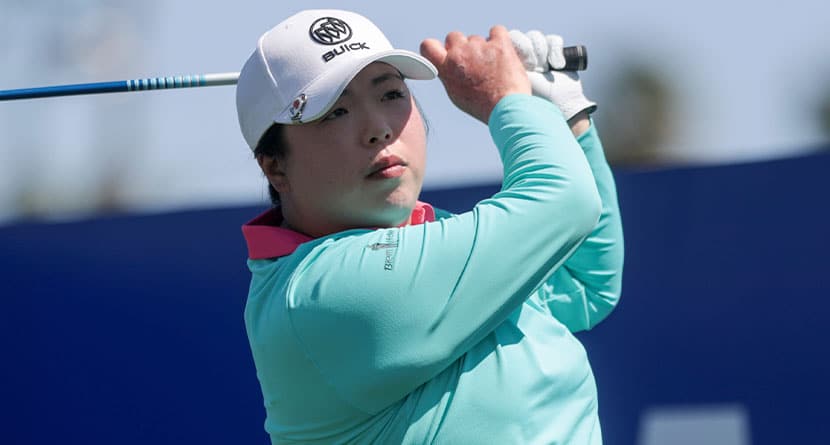 The LPGA Tour’s inaugural Bank of Hope LPGA Match Play at Shadow Creek in Las Vegas wasn’t without controversy over the weekend.

The new event, which was added to the schedule in February, features a 64-player field in the model of the men’s World Golf Championships – Dell Match Play Championship with three days of round-robin matches followed by a 16-person knockout round.

For anyone to make it through to Sunday’s semifinals, that means they would have had to play at least five matches over four days with another two to come on Sunday. The final on Sunday came down to eventual champion Ally Ewing and reigning Women’s British Open champion Sophia Popov, but it the consolation match — or lack there of — that sparked the controversy.

China’s Shanshan Feng, a 10-time LPGA Tour winner, major champion and Olympic bronze medalist, opted to concede the third-place match against Thailand’s Ariya Jutanugarn before it even began citing fatigue and a desire to rest up for this week’s U.S. Women’s Open.

.@shanshanfengCHN has elected to concede the @LPGAMatchPlay consolation match against Ariya Jutanugarn this afternoon. In so doing, Jutanugarn finishes in third place and Feng in fourth.

“Next week is the @uswomensopen. I just want to be well-rested and protect myself.” pic.twitter.com/oSilsqlcXY

Feng lost her semifinal match to Popov 1-down on Sunday morning, and instead of heading back out to play against Jutanugarn in the consolation match, Feng opted to concede.

“I think I made the right decision for myself because I’m really, really tired after finishing six rounds in five days, let’s say four and a half days,” she said. “If I play 18 more I don’t know how I will do. I might fall over on the course. I don’t think I should push myself that bad. You know, if I got in the top two, of course, yes, I would play until I fall down on the course. But I lost the match in the morning, and I think it’s better idea just to get rested after this.”

Feng’s claim of fatgiue was no joke — she played a total of 112 holes over five days, more than anyone in the tournament. On Saturday alone she played 41 holes, outlasting her opponents in extra holes in both the Round of 16 and the quarterfinals.

And with a major championship coming up in four days, she said it was best for her to skip the third-place match.

“Next week is the U.S. Open open coming up. It’s a very hilly and challenging course, so I just want to be well-rested and protect myself,” she continued. “I am an old lady, so I need to learn how to protect myself, right? And I think that’s the key why I have kind of a long career on the Tour, because I learned to protect myself, yeah. I hope everybody understands my decision, and I think it was the right decision.”

Even if folks understood her decision, it didn’t stop them from voicing their disagreement.

Totally unprofessional & disrespectful to the sponsor, public out watching the golf & TV coverage for Shanshan Feng to withdraw from the 3rd/4th place match citing tiredness. When you enter you commit to the full schedule. Should be DQ’d & fined.

I think this is a very bad look. It’s match-play, conceding an entire match to ‘save yourself’ for another tournament is not in the spirit of the game

In the end, Feng made the decision that she felt was best for her and her chances at the major championship upcoming.