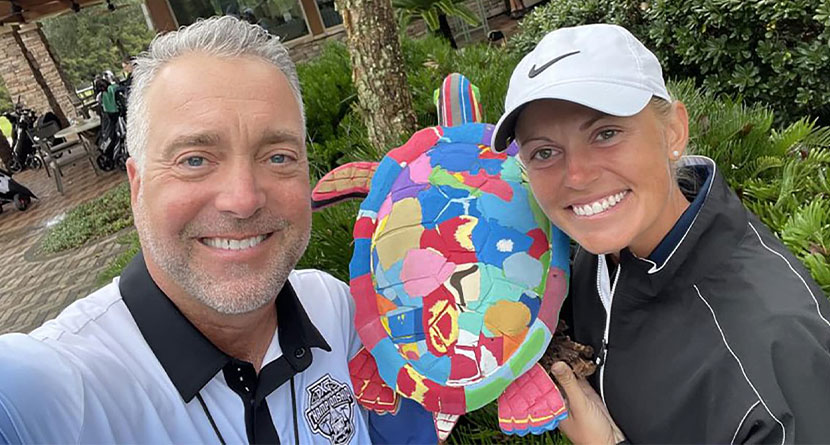 Elite-level tournament golf for women hoping to compete one day on the Symetra or LPGA Tours is coming to the eastern seaboard thanks to a father who watched his own daughter struggle to take the next step from college to the pros.

While men’s mini-tours and feeder tours are ubiquitous around the U.S., women of the same pedigree are shelling out $40,000-$60,000 per year with fewer opportunities and conflicting schedules, forcing aspiring pros like Hannah Berman to take up side hustles and off-season jobs in order to chase their dreams. Berman’s father, Mark, who has been by his daughter’s side chasing this dream since she was nine years old, decided to make a change instead of bemoaning the lack thereof and that’s how The East Coast Women’s Professional Golf Tour was born.

Mark Berman’s vision began by getting a sanctioned event on the Women’s All Pro Tour, one of two mini-tours running events for women in the country (along with the Arizona-based Cactus Tour). That led to the PXG Women’s Match Play Championship and eventually paved the way for the ECWPGT.

”Our goal is to complement the other tours rather than compete,” Berman said. “We’ll keep an eye on schedules, so players don’t have to choose one over another. At the same time, there are plenty of players looking for tournaments. We’re creating events in areas where players are currently underserved, helping them cut down on front-end costs.”

The ECWPGT’s Winter Series will begin on Jan. 17, 2022 and feature seven events in Florida before heading up the coast to coincide with state opens before returning South for the season-ending PXG Match Play.

Each event will feature $25,000 purses with $10,000 to the winner and $425 entry fees. The tour plans to cover operating costs and purses via sponsorship dollars and it is also setting up the Access Golf Fund, which will allow the public to donate to the competitors.

So proud of Mark as he carves a new path for women golfers. Welcome to the Golf World, East Coast Women’s Tour! https://t.co/5QFIVESKfq

Hannah Berman has backed off her professional aspirations, opting to pursue PGA status through the PGM program, so this isn’t the case of a parent buying their child status. As Mark Berman says, the advent of this feeder tour isn’t for his daughter, it’s because of her and the thousands of aspiring female professionals who haven’t had the opportunity to follow their dreams.