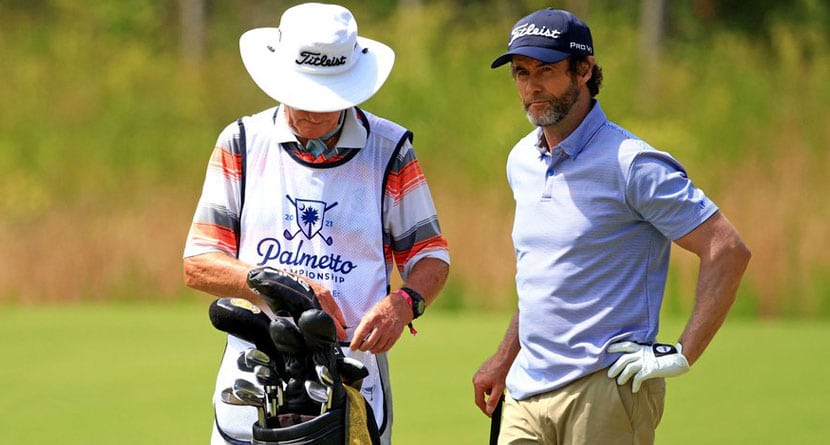 Last Sunday, Mark Hensby was driving a moving truck 14 hours from Scottsdale to San Antonio. On Tuesday, he found out he had gotten into the field at the Palmetto Championship at Congaree.

Only making his second start in three and a half years, Hensby was happy to tee it up even if he was a little stiff from the drive a few days prior.

Understandably for the 49-year-old Aussie, there were some signs of rust over the first few holes at Congaree, a debutant course on the PGA Tour. A triple-bogey 7 on the par-4 third on Thursday seemed costly at the time, but it would prove to be much more expensive as Hensby reached the ninth tee box.

Hensby noticed a dot on his Titleist ProV1 golf ball that he didn’t recognize, and called over his playing partners and eventually Senior Tournament Referee Mike Peterson to figure out what it meant. The dot – or more accurately the dash – was indicative of Titleist’s ProV1 Left Dash ball, a ball with a slightly different spin profile and a small dash marking.

“I asked my caddie, ‘Hey what’s this dot on the ball? I’ve never noticed this before; did they do something with the new pro V1?’” Hensby told PGATour.com. “And he didn’t know, so I asked my playing partners and they were like, ‘That’s a low spin ball.’ Now I don’t use this ball, so there was a lot of confusion where it came from – none of my others had the dot – but we knew I had played the wrong ball.”

Under the Model Local Rule G-4 – sometimes known as the One Ball Rule — Hensby was assessed a two-shot penalty for every hole he used the incorrect ball on, which spanned holes four through eight, a stretch that he had played in 1-under par. Hensby had put the ball into play after finding a penalty area on the fourth hole

Previously, this type of infraction carried a maximum penalty of four strokes but now is two shots per hole following the Rules revisions in 2019. The purpose of the rule is to prevent a player from using balls with different playing characteristics depending on the nature of the hole or shot to be played.

How did a different ball get into Hensby bag, let alone get put into play? It was a simple case of a putting green mix-up as he warmed up near Pat Perez who uses the Left Dash ProV1 ball.

“Somehow I picked up one of Pat’s balls and he ended up with one of mine,” he said. “I only found this out because Titleist wanted to get to the bottom of it. I thought they had a wrong ball in the sleeve that I had.

“If you look at both balls it’s hard to know the difference. It’s not like one is black and one is red. They’re both black, but one has a small dot on it and one doesn’t. Unfortunately, I didn’t notice that. I’m glad he didn’t use mine.”

Hensby’s gaffe moved him from 2-over on the day to 12-over, and essentially ended his bid to make the cut before lunch time on Thursday. Hensby played in, shooting a respectable 1-over par 36 on the back nine to post a 13-over par 84.

“I was actually playing pretty decent,” Hensby said. “I didn’t get off to the greatest start, but I birdied the par 3’s during that stretch and made some good pars. I was just 2-over at that point and feeling pretty good about my rebound. But after I got the penalty obviously it was tough from that point on, and it was a shame because I knew my tournament was over.”

Mark Hensby WD after his first round of the Palmetto Championship at Congaree.

Hensby withdrew from the tournament after the round.

Turning 50 at the end of June, Hensby said he’s looking forward to the next stage of his career on the PGA Tour Champions.

“I’m working hard to get my game back up there,” he said. “I’m looking forward to the Senior U.S. Open and the Senior British Open and hopefully getting status on PGA TOUR Champions so I can get some more regular playing time again.”