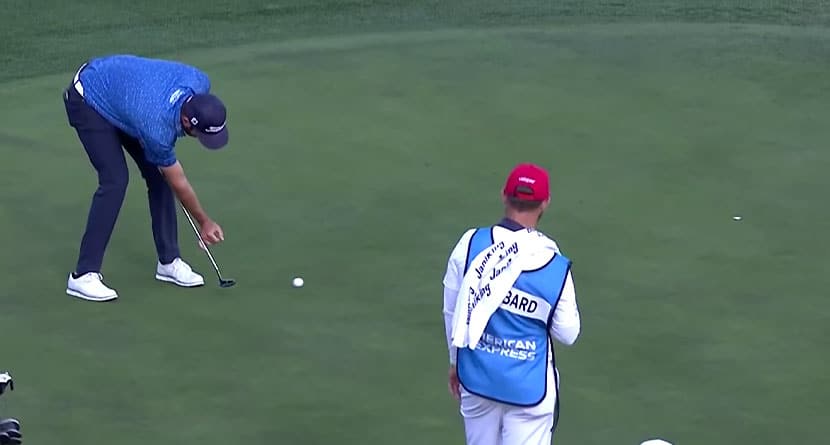 There are a few different ways professional golfers can handle a bad day on the course: they can get beside-themselves mad, break clubs and generally pout, or they could chalk it up to “one of those days” and brush it off vowing to do better the next time they tee it up.

Mark Hubbard falls into the latter category, and he showed why on Friday at The American Express.

Following an opening-round 4-under par 68, Hubbard was four back of the first-round lead and on the periphery of contention. However, a poor second round sent him plummeting down the leaderboard to well outside the 4-under par cutline.

An above-average putter on the PGA Tour Hubbard needed 31 putts to get around The Nicklaus Tournament Course on Friday en route to a 4-over par 76. It was his 30th putt of the day, a four-footer for par on his final hole of the week, that drew some eyeballs.

Setting up to the ball normally, Hubbard launched into an elaborate grip change that resulted in him hunched over the club with his right pinky as his guide.

“Like most things, the key aspect is really the presentation,” Hubbard told PGATour.com. “You’ve really got to sell it, that you’re going in for a normal stroke. Really look focused and determined, and at the last second, shimmy in there. Reminiscent of a Jack Parkman from Major League 2, shimmying at home plate.

“The key aspect to The Snail is to wrap that right arm over the shaft, and then get the right pinky finger looped back under. Really lock it into that right arm.”

As evidenced by its polish, it clearly wasn’t the first time Hubbard had used it, but he did say that “it’s got to be a special occasion” if The Snail is going to make a special appearance.

Hubbard said he developed it during his time at San Jose State University and he has verified with rules officials that it’s a legal grip.

The biggest disappointment Hubbard said, who has used the stroke other times during his career including at the  Mayakoba Golf Classic and at the Korn Ferry Tour’s Dormie Network Classic, is that he missed the putt.

“I’ll break it out just to mess with people,” Hubbard said. “It usually makes for a pretty automatic putt inside 5 feet. I’m a little disappointed I missed that one; I don’t miss too many of those with The Snail. It just broke a little bit more.”