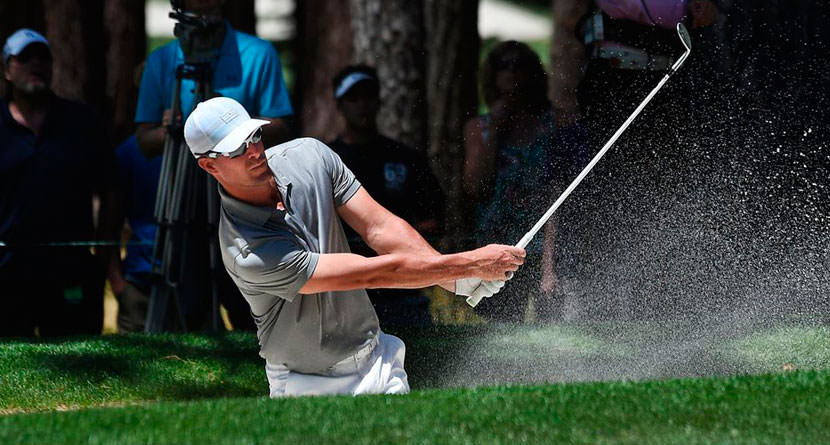 The Diamond Resorts Invitational will never be confused with the Masters, but for half of the pro-am field, the DRI is as close as they’ll come to playing golf under major championship pressure.

Mark Mulder, a two-time All-Star pitcher for the Oakland Athletics, has become one of the premier golfing celebrities in the world. Boasting a +1.6 handicap and playing out of Tour pro haven Whisper Rock Golf Club, Mulder is no slouch. He’s won three consecutive American Century Championships at Lake Tahoe and he was the defending champion of this past week’s Diamond Resorts Invitational.

Attempting to chase down former pro tennis star Mardy Fish, Mulder found himself needing a miracle on the 72nd hole, a long par-3 over water. Instead, Mulder saw his hopes dashed as soon as his club’s hosel met the ball.

A+ shank on 18 for mark mulder pic.twitter.com/Fl7TJjd1JG

Fish finished the day birdie-birdie-par, accumulating 7 points in the modified Stableford scoring system over the final three holes while Mulder’s shank led to a bogey and a total of  60 points, 15 behind Fish and one point behind runner-up Jeremy Roenick.

To Mulder’s credit, he took the shank and the loss in stride.

Holy shank!!!! Just have to laugh it off. Thanks for a great week to everyone involved. @MardyFish was fantastic! We had some great crowds considering the cold weather. https://t.co/K3UXmDVoi7

Here are the complete final round highlights from Golf Channel.