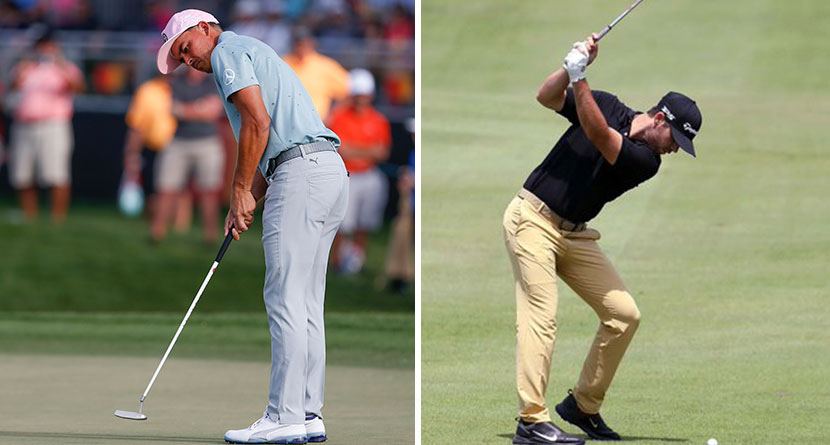 Think about what you see on a weekly basis on the PGA Tour — things that you may not notice if you’re not watching closely — Rickie Fowler hovers his putter before he takes it back; Matt Kuchar does the same thing with his driver; Henrik Stenson and Matthew Wolff both have triggers that kick-off their swings.

Which of these, if any, can be beneficial to you, the amateur golfer? We went straight to the folks we trust the most with our game: the SwingU Master Faculty.

Here’s what they had to say.

All golfers try to find things that’ll work. Try different setups. Take Bryson Dechambeau. He plays a longer putter to help him improve his stroke. Now he hovers the driver and swings harder.

I suggest that the best thing to do is look at your game, dissect it and build more confidence and reliability.

I feel like players should go back to the fundamentals. Build consistency and confidence over time. Set realist goals.

Rickie Fowler hovering his putter helps to promote a smooth swinging motion. Matt Kuchar hits a lot of pitching wedges and 3-woods off the ground.  They are his litmus test for how well he is swinging.

If he can hit low-flighted pitching wedges and high 3-woods off the ground he knows his golf swing is neutral. Don’t spend your time hitting 7-irons. Your swing can be non-neutral and still hit those fine.

One thing I would watch for is many players have an exaggerated rehearsal practice swing that is opposite of the default error that they are trying to avoid in their swing. We can learn from this.

There are so many. I like how Rory (McIlroy) and Tiger (Woods) sink in transition. This pumps the ground full of energy, energy which they then use to jump out of the ground to pound it miles!

I like to watch the ProTracer lines as many people are under the illusion that players just hit it straight. Most (pros) shape it and many shape it both ways as the tracer shows. They are artists painting with ProTracer lines!

Lastly, I like looking at a swing from a how does that work perspective? What are the matchups that make (Dustin Johnson) work compared to another contrasting style?

If you have excessive lead wrist flexion, you will need to match it up as they do with massive strength, huge pressure and mass shift in transition, big side bend and lead side extension and some way of holding the face off.

My advice? Be a great version of yourself!

I recommend finding the quirk that gets you going. There is no one way, just find the one that works for you. Maybe people will be copying you someday.

I wouldn’t call these quirks, but these are three behaviors that I’d like to recommend.

Watch Tiger Woods when he putts. After the stroke, he holds the finish at its farthest point – no recoiling or dropping down of the putter head. Only then does he turn his head to watch the putt. Also, he holds his posture after every putting stroke. He does this until the putt stops rolling (often in the hole). I’ve seen him hold his posture for a full 10 seconds after striking a 45-foot putt, only standing up when it fell into the hole.

Watch Cristie Kerr and Vijay Singh take a full, deep breath and exhale before walking in to address. I taught that to them (as well as every other golfer I coach). A critical element is to exhale all the way out before moving forward toward the ball. The in-breath energizes you; the out-breath settles you. So it’s essential to complete the out-breath to get as grounded as you can be. I give some players a mental cue to recite as they exhale: “Breathe it down; feel the ground.” The swing is powered from the ground up, not the top down, so this is a really helpful element of the pre-shot routine.

Jim Furyk’s post-shot routine is one to emulate. After a less-than-happy swing: erase and replace it with the swing you wished you’d made. Then you never leave a spot with a bad swing that you might compensate for on your next swing, and you have something good to focus on in your next pre-shot routine.