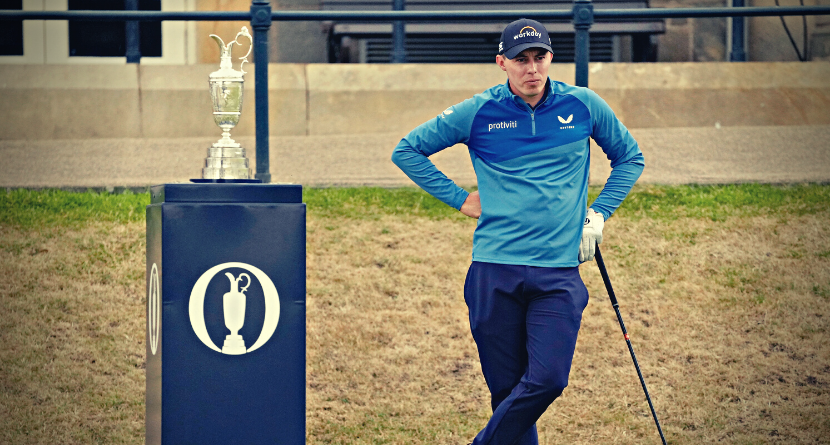 But after two magical (and lengthy) strolls around the Old Course, Fitz was less enchanted than most by the historic venue’s handling of the 150th edition of the sport’s oldest championship.

“I’ll be honest, I’m not really a fan,” Fitzpatrick said. “It’s difficult to … I just feel like sometimes I’ve heard it on commentary all week, you can hit good shots and get bad bounces and you can hit bad shots and get good bounces. And like I say, I felt like for the first seven holes I didn’t really miss a shot and I’m walking off seventh green plus one. It’s tough to take. It’s tough to stay patient. I managed to make a few putts coming in. That always makes you feel a little bit better.”

Fitzpatrick’s analysis might lead one to believe he was never a factor; in reality, he managed the hoopla around Woods on Thursday and Friday beautifully, putting himself in contention with a 66 on Friday. But his run at a second straight major fizzled on the weekend when he submitted a 69-72 finish that left him in a tie for 21st.

When another major champion from this season, Justin Thomas, got wind of Fitzpatrick’s critique, he was compelled to issue a rebuttal.

“It’s perfect in terms of set-up,” said Thomas, who had a much more frustrating week, finishing in a tie for 53rd. “But if you get greedy, it can be hard to get par. I love this tournament, arguably more than any of the other ones. I don’t understand … I get that it’s shorter, but any Open. The cut is even par on a course that’s 6,500 yards. It has held its own. It’s one of those courses, if we get good weather, we’re going to tear it to pieces. The good part about this week is that there’s been a bit of wind and they’ve been able to set some challenging pins, and when the greens are rolling at 9 and 10, you can do that.

“It’s not unfair, it’s just difficult. I thought the R&A did an unbelievable job setting up the course this week.”