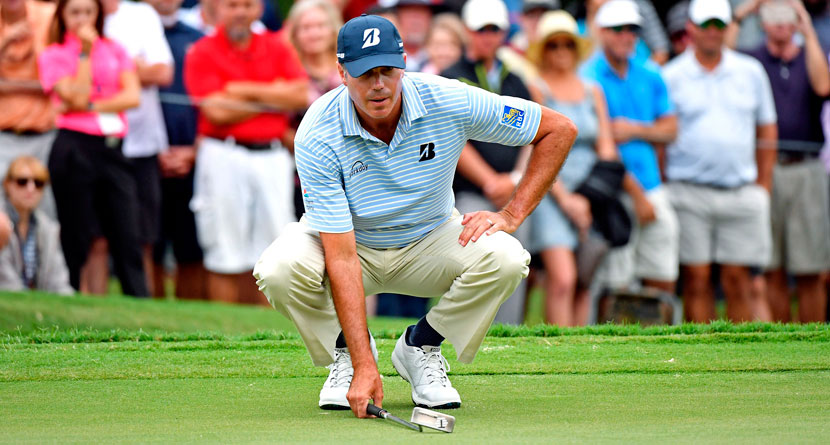 If you were wondering if Matt Kuchar may have lost some of his goodwill with golf fans over the course of the last year, look no further than this week’s Porsche European Open in Germany.

Kuchar, who has had numerous PR-nightmares in 2019, seems to have lost the benefit of the doubt with the European Tour announce crew as a ruling Kuchar received on Friday in a waste area was the scene of some light-hearted heckling.

With his ball resting in a waste area, Kuchar is entitled to removing loose impediments around his ball before he strikes the shot. As he crouched and picked away stones and other debris, the broadcast crew laid into him.

Announcers were not too happy pic.twitter.com/Jnd9GItyPq

“He’ll be here a long time,” one announcer said.

“Well he’s going to have a perfect lie in a minute if he keeps going,” another announcer replied. “So what he’s doing is he’s treating them like they’re all little loose impediments, and it be on a tee peg very shortly.”

“I just don’t understand that. I think that is not quite…” an announcer said before trailing off.

“Well he’s doing it very quickly, isn’t he?” the other says. “Because what he’s been told is he can move the bigger bits, but what he’s doing is he’s moving everything. So just get him a spade.”

The landscaping Kuchar did in the waste area didn’t prove to be enough to keep him around for the weekend as a pair of 2-over par 74s sent the American packing after Friday’s second round.

Entering Sunday’s final round, Scotsman Robert MacIntyre and German Bernd Ritthammer were tied for the lead at 9-under par. Paul Casey was hot on their heels at 8-under par the first three rounds.