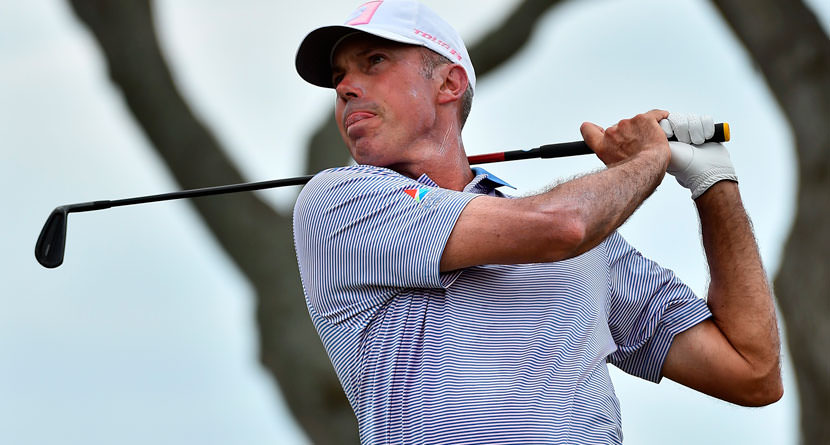 Matt Kuchar is known for being one of the nicest guys on the PGA Tour. The affable Georgia Tech product is a fan favorite wherever he goes, but he may have lost a few fans this week at the AT&T Byron Nelson.

The tournament switched venues this year leaving behind Las Colinas Sports Club in Irving in favor of the Ben Crenshaw and Bill Coore-designed Trinity Forest Golf Club in Dallas. The Trinity Forest course is much different in both aesthetics and playability than the rank and file Tour courses that players see week in and week out.

Matt Kuchar’s Tour-best made-cut streak ends today, at 30. Yet another reminder that no one will ever even sniff Tiger’s 142 in a row.

While there were some early opinions on the track, Kuchar offered up some of his own criticism mid-round, which were picked up by a hot mic on PGA Tour Live. Asked after his first round 1-over par 72 his thoughts on the course, Kuchar tiptoed around blaming the course, but just barely.


“I think best said under the lesson, if you don’t have anything nice to say, don’t say anything at all,” Kuchar said, according to GolfChannel.com’s Will Gray. “I really liked Las Colinas. That place was great. I really, really enjoyed Las Colinas.”

Of course, with the criticism coming from Kuchar, he did it in the nicest way possible.

Kuchar shot a second-round 2-under par 69, but it wasn’t enough to play the weekend, ending his 30-tournament streak of made cuts. After this second round, Kuchar again had something to say, but this time it was more a criticism of himself.

Candid stuff from Kuchar after rare MC: “I’m mostly disappointed w/ myself in that I let my dislike of the course affect my performance. As a pro, if they put 18 holes in a field & tell you this is where the tournament is, you go figure out how to play. I did a poor job of that.”

“I’m mostly disappointed with myself in that I let my dislike of the course affect my performance,” he told Gray. “As a pro, if they put 18 holes in a field and tell you this is where the tournament is, you go figure out how to play. I did a poor job of that.”

Kuchar has never won the Nelson, but he did rack up five top-15 finishes between 2011 and 2017 at the event’s former host course.