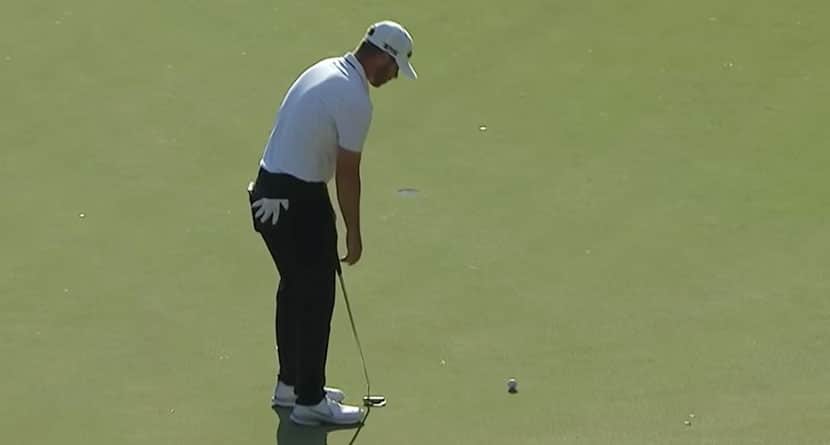 Matthew Wolff had a terrible, horrible, no good, very bad day on Thursday at the WGC-Workday Championship at The Concession, shooting his worst round as a professional and eventually withdrawing after posting an 11-over par 83 in the first round.

Wolff’s day started innocuously enough with a fairway, green-in-regulation, two-putt par at the 10th hole, but things went seriously sideways after that.

Wolff’s next six holes were bogey-bogey-double bogey-par-quadruple bogey-double bogey. To Wolff’s credit, he did finish the front nine birdie-birdie to post 8-over par 44, but things didn’t get much better on his back nine.

The 2019 NCAA Champ three-putted from 15-feet on No. 1 for triple bogey and followed that up with a bogey on No. 2. The real microcosm of his day came four holes later, however.

Playing the par-3 6th hole at The Concession, Wolff hit a nice tee shot to 14 feet and then did this while preparing to hit the birdie putt.

“That would give you an idea of the sort of day Matthew Wolff is having,” David Feherty said.

As Gary Koch and Dan Hicks noted immediately, Wolff caught what may well have been his only good break of the day in that he would not be assessed a penalty.

Under Rule 13.1d, which was updated in the modernization of the Rules of Golf in 2019, “there is no penalty if you, your opponent or another player in stroke play accidentally move your ball or ball-marker on the putting green. You must replace your ball on its original spot (which if not known must be estimated) or place a ball-marker to mark that original spot.”

Of course, the good break was short-lived. After Wolff replaced his ball, he hit his birdie putt four feet past the hole and missed the come-backer for par.

Matthew Wolff is a WD after R1 @WGCWorkday

Being a World Golf Championship event, Wolff will get paid last-place money of $32,000, albeit it will not count towards his official earnings, as if the 24-year-old millionaire would care about that distinction.

In the grand scheme of things, there are plenty of golfers who would be smitten to make over $30,000 en route to shooting an 83, so it’s not all bad news for Wolff.