Homa Heckler Could Have Been Difference Between $300,000 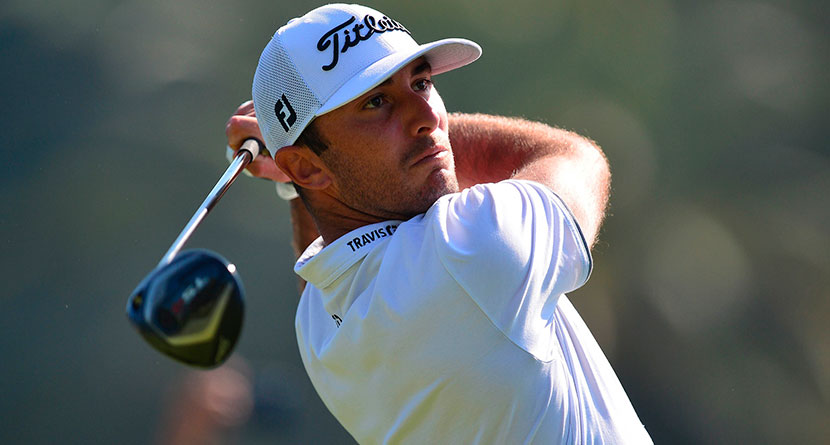 PGA Tour pro Max Homa has become one of the easiest guys to root for in professional golf.

A standout college player at Cal, Homa battled his way through golf minor leagues to earn his PGA Tour card in 2015. He would ping-pong back and forth over the next three years between the PGA and Korn Ferry Tours before making a foothold in 2019 with a win at the Wells Fargo Championship.

Coinciding with his rise from rank-and-file Tour pro to winner, Homa has connected with fans in a way few others have been able to do via his infectious and relatable personality. Last year, Homa joined the No Laying Up podcast to give a glimpse into the struggles he was facing on the course in a way very few Tour players have before.

In case you needed a rooting interest today, here’s Max Homa with one of the greatest 4 minutes in our podcast history. Missed 15 of 17 cuts in 2017, but kept saying “today’s the day.” https://t.co/Rj3wG7Njh6 pic.twitter.com/LPUijqh1Fw

Now in his fourth year on the PGA Tour, Homa appears to be having that “breakout” season right before our eyes. Playing the last five consecutive weeks, Homa has notched four top-10s with his best finish, a T-5, coming on Sunday at the Genesis Invitational.

However, Homa’s final moments on the 18th green at Riviera Country Club left something to be desired as he was heckled in the midst of his backstroke as he prepared to strike a 16-foot par putt that would have given him a share of second place, a potential difference of over $300,000.

Heckler-forces @maxhoma23 to back off a big par putt on 18. @GreinerJoe not happy, and rightly so. What’s wrong with people? #Booze @thegenesisinv

Homa spoke about the heckle at length on his podcast with Fox Sports’ Shane Bacon, and gave fans an idea of what truly goes through a pro’s mind when something like that happens.

“It was a woman,” Homa said. “I don’t think I would have necessarily made the putt — it was a hard putt — but I would like my fair shot at a good stroke on the last. I took (the putter) about three inches back on my takeaway and she screamed, ‘Gooch’ for Talor (my playing partner). I don’t know why. I turned around, I saw her ducking. (The fans) started booing, which was really cool of them to do because that needed to be done because she was completely out of line.

“I backed off, I went through (my routine). Joe (Greiner, my caddie) did his absolute best to get me back in a great mind frame. He walked over to me and he said, ‘start over and will this ball into the effing hole,’ and I really wanted to, but it was hard. I could have gone back and done things differently —  I could have picked up the golf ball and remarked it — I could have done a lot of things, but the general issue was, as I was putting, the only thing I was thinking about was someone else yelling.

“I felt like I almost flinched more at the next putt than I did at the first kind of balk and walk-off. It just sucks. It stinks to think that I didn’t get my fair stroke at it, in my opinion. I also need to grow up and get better at the mental approach of things and be a little bit tougher.”

If u wanna know, through words, what it’s like to almost win on the best course of the year, listen to our podcast! I gave it a run but Adam Scott is simply too handsome. Also, @shanebacon is a genius (in his own right)https://t.co/ONCFMLfxjj

The missed par put dropped Homa from a four-way tie for second place into a five-way tie for fifth place, which nets out to a $304,110 difference, according to the PGA Tour’s tie table.

Homa was able to make his three-foot bogey putt to secure the second-best finish of his career at a course he knows intimately as a Burbank, California native.

You can listen to the full podcast here.