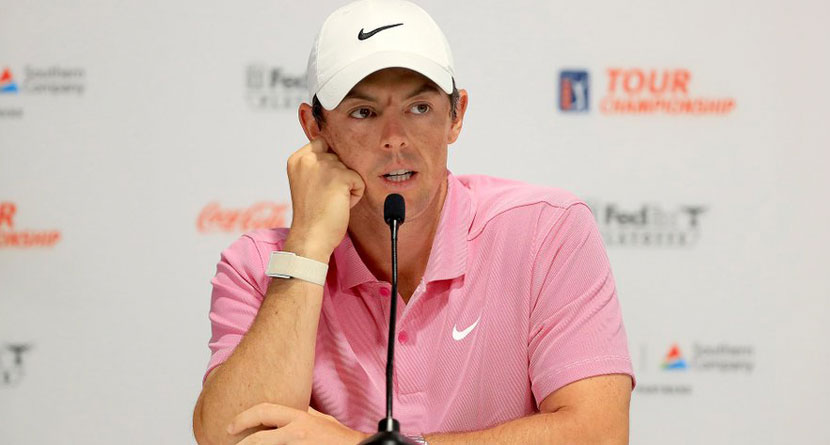 The PGA Tour puts all of its power and influence behind the annual FedEx Cup Playoffs, but despite their best efforts to set the end-of-the-year stretch as a hallmark of a player’s career, they’re missing the mark, according to Rory McIlroy.

Meeting with the press ahead of this week’s Tour Championship in Atlanta where the leader will start at 10-under par and $60 million will be paid out to just 30 competitors, McIlroy spoke candidly about where the FedEx Cup is missing the mark.

Of the two examples McIlroy noted — money and the staggered start — the ridiculous amount of money that is being handed out this week isn’t at the forefront of players’ minds when they tee it up on Thursday.

“Who knows what the winner wins at the Masters? I don’t know because that’s not what it’s about,” McIlroy said on Wednesday. “So if the FedEx Cup wants to create a legacy that lasts longer, it doesn’t need to be about the money. It should be about the prestige of winning an event that you’ll be remembered for.

“The money’s nice. It’s wonderful. It brings us as top golfers in line with maybe some of the other sports in terms of what they’re earning as well. I’m not saying that money is a bad thing. It motivates a lot of people, but I think for me and my competitive spirit, I want to win the FedEx Cup for a lot of different reasons. Is money one of them? Yeah. Look, it would be nice to win on Sunday and be, ‘Oh, I’m $15 million richer,’ whatever it is. But at the same time, I’ll get more satisfaction from winning the golf tournament and playing well.”

Speaking to the staggered start of the event, McIlroy noted that once again, the tournaments with the most storied and respected legacies in the game begin at zero, not a modified handicapping of players based on standings.

“(I) just had a breakfast earlier with some of the sponsors there, and what I said to them was, if we’re at the PGA Tour trying to do the season of championships, where it starts at The Players in March and goes through the four majors and culminates with the FedEx Cup in the end, if the FedEx Cup really wants to have this legacy in the game, like some of these other championships do, is people starting the tournament on different numbers the best way to do it?”

McIlroy weighed his opinion on the staggered start against what the Tour is admittedly trying to do: remove undue clutter and confusion from what has long been one of the biggest tournaments of the year, but his point stands.

Is the FedEx Cup a just glorified money-grab that lures the top players in the game out of an early offseason break, or is it one of the biggest events in the game. At this point, both of those things can be true.

However, it’s up to the Tour to come up with a way to make it as much about the prestige and honor of winning the Tour Championship and FedEx Cup and less about the bonus that comes along with it.