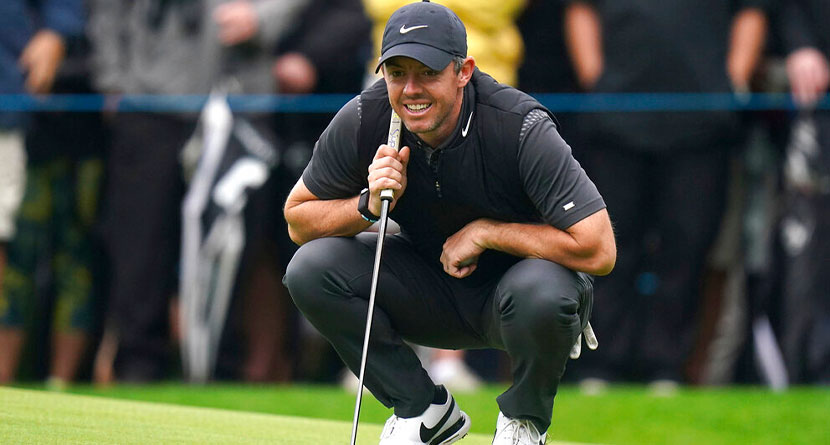 U.S. Open champion Matt Fitzpatrick is open to having LIV Golf players on Europe’s team at next year’s Ryder Cup, because, as he said, “I just want to make sure that we win.”

Europe captain Luke Donald, meanwhile, is toeing the official tour line when he says he’s in “limbo” waiting for the conflict to be decided in the courts.

As several of Europe’s top players prepare to play this week’s Italian Open on the Marco Simone course outside Rome that will host next year’s Ryder Cup, the pre-tournament discussion has been about who should and who should not be included on the 2023 team.

“I have said it once, I’ve said it a hundred times: I don’t think any of those guys should be on the Ryder Cup team,” McIlroy said Wednesday of the players who have joined the Saudi-backed breakaway series.

Rory McIlroy says he doesn’t think any of the LIV Golf players should feature on Europe’s 2023 Ryder Cup side pic.twitter.com/m6Y2oAp2JT

Litigation is ongoing on both sides of the Atlantic involving the PGA and European tours after LIV golfers were excluded from events, and the divide between the players sticking to the traditional tours and those who have joined the lucrative breakaway series is growing.

But Fitzpatrick, who won his first major title in June, is taking a more neutral stance.

“I just want to win the Ryder Cup. … I want the 11 best guys we can get,” said the Englishman, who lost all three of his matches when the U.S. romped to a record rout in Whistling Straits, Wisconsin, last year. “I’m not really too bothered about where they are going to come from.”

Fitzpatrick even went so far as to reach out to a LIV player at the BMW PGA Championship at Wentworth last week.

“I told him I’d happily have him on the team,” Fitzpatrick said, without naming the player.

Donald was named captain last month after Henrik Stenson was stripped of the title because he joined LIV.

“Nothing that’s really changed since I was appointed,” Donald said. “We’re still a little bit in limbo. We don’t know what’s going to happen with the lawsuit so I’m trying to not really put too much energy into it. Once we get a clearer picture, I can give you better answers.”

While European Ryder Cup stalwarts Sergio Garcia, Lee Westwood and Ian Poulter were among the contingent of LIV golfers competing at Wentworth, none of those high-profile names came to Italy.

“I had already committed to playing in this event before Luke was the captain and it was someone else,” McIlroy said, refusing to mention Stenson by name again.

“I’ve had discussions with Luke and actually a few of us are meeting for dinner tonight for a little bit of team bonding but also to have a talk about the course and how we think it should be set up to favor the European team.”

Located a half-hour drive from the center of Rome — without traffic — the course owned and run by fashion designer Lavinia Biagiotti Cigna features hilly terrain which should lend itself to a stadium-like setting suited for the Ryder Cup.

“You’ve got two drivable par 4s (Nos. 11 and 16), you’ve got a few holes with water and you’ve got that wonderful closing hole which could be really exciting,” McIlroy said of the back nine.

The only time McIlroy previously played in Italy came when he won the European amateur championship in 2006 in the northern town of Biella.

McIlroy has been enjoying strolling around Rome with family, especially since his wife once studied in the city for seven months “and she knows her way around.”

McIlroy and his teammates’ main order of business, however, is strategizing how to reduce the gap from that 19-9 whipping by the U.S. in Wisconsin.

“The European team has a core of six or seven guys that I think we all know are pretty much going to be on that team, and then it’s up to some of the younger guys to maybe step up,” McIlroy said. “I think we were in need of a rebuild anyway. We did well with the same guys for a very long time but everything comes to an end at some point. I think Whistling Straits is a good sort of demarcation.”

Donald is paired with rising Italian Guido Migliozzi and Adrian Meronk, the Polish player who won the Irish Open in July, for the opening two rounds this week.

Then there’s Nicolai Højgaard, the 21-year-old Dane who won at Marco Simone last year a week after his identical twin brother, Rasmus, won the European Masters in Switzerland .

Vice captain Thomas Bjørn is in a group with the 24-year-old Norwegian Viktor Hovland, who is No. 11 in the world golf rankings.

“I’m excited to see their games,” Donald said. “I’ll be keeping my eye on some of the younger, exciting talent to try to make this team.”

Luke Donald has called on Europe’s young golfers to create their own Ryder Cup legacy and break into next year’s team, as participation for LIV Golf members remains “in limbo”.

Then there’s Francesco Molinari, the hero of Europe’s victory in 2018, who’s looking to return to the team after missing 2021 because of back issues. He’s coming off a top-10 finish at Wentworth.

“Having an Italian on the team would be huge,” McIlroy said.

Molinari said the issues with LIV will take a back seat come the Sept. 29-Oct. 1 event next year.

“The Ryder Cup is such a big, important and fantastic event that I don’t think it will be damaged at all by the conflict,” Molinari said. “Even if the situation isn’t resolved, I think that for that week everyone’s attention will be on the Ryder Cup.”