McIlroy Feeling Like A Heavyweight Who Wants His Belt Back 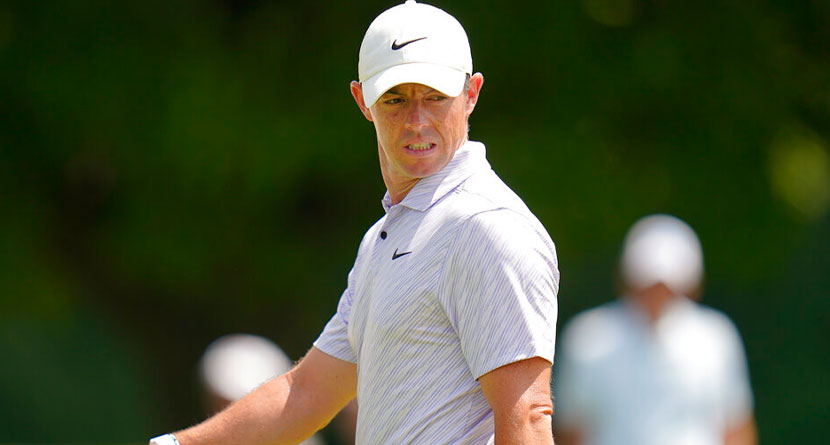 RIDGELAND, S.C. (AP) — Rory McIlroy has reached the top of the world ranking eight times, and it’s still not enough. Even if the feeling is nothing new, the reward never gets old.

McIlroy defends his title this week in the CJ Cup — which has moved from high above the Las Vegas Strip to the lowlands of South Carolina — with a mathematical chance to reach No. 1 in the world for the ninth time.

“It sort of illustrates you can have your runs and you can stay there, but I think the cool part is the journey getting back there,” McIlroy said Wednesday. “It’s sort of like a heavyweight boxer losing a world title, and it’s a journey to get that title back.”

A year ago, McIlroy was No. 14 in the world when he raced by the field in Las Vegas to win the CJ Cup at The Summit. He is a two-time winner this year, the FedEx Cup champion and has five straight top-10 finishes coming into this week.

He will need some help at Congaree Golf Club. According to “Nosferatu,” the Twitter handle of a world ranking guru, McIlroy can reach No. 1 by winning the CJ Cup as long as top-ranked Scottie Scheffler doesn’t finish in a two-way tie for second or better, or by finishing alone in second provided Scheffler finishes out of the top 34.

Motivation is not lacking for McIlroy, even at the end of a long year and with only two tournaments left. There is the chance to reach No. 1 again, and he leads the DP World Tour points race in Europe.

Scheffler won the PGA Tour player of the year and was poised to claim the FedEx Cup until McIlroy rallied on the last day. He had the best year in golf, even if it feels like the best stuff was a long time ago.

Scheffler first reached No. 1 in the world by winning the Dell Match Play in Texas, his third victory in five starts, and then he ended his big run by winning the Masters. The rest of the year wasn’t a dud, by any stretch. He lost in a playoff at Colonial and came within one putt of a playoff at the U.S. Open.

Scheffler needed time to relax, even though mind never strays to far from golf. That was particularly true this time.

“I’m very competitive and I was frustrated with how last season ended. I really want to win the FedEx Cup. So for me, it was kind of harder to check out this time of year,” he said.

He already made one big change with his putter. Scheffler said he was struggling to line up his putts toward the end of the year. He grabbed a mallet-style putter that he used in his junior amateur years and something clicked.

“I fooled around with that model, figured out what I liked and didn’t like and I talked to the guys at Titleist and they were able to get a putter to me in like a day from California,” he said. “I feel like I’m more consistent with it.”

The field features 15 of the top 20 players in the world, most of them seeing the course for the first time. Congaree also filled in for the Canadian Open, canceled last year because of travel restrictions from the COVID-19 pandemic.

The CJ Cup was still uncertain how travel would be to South Korea, so it decided in June to play another year in the United States. It was in Las Vegas the last two years.

Among those in the field last year was Tom Kim. Now the 20-year-old is back with some star power behind him, two PGA Tour victories in his last five starts, a spark at the Presidents Cup and the No. 15 spot in the rankings.

“The rise that Tom’s been on over the last few months has been incredible,” McIlroy said.

Kim was in the press center as McIlroy was speaking.

“Rory, I have a question for you,” Kim said. “What’s it like having so much success as a young player?”

McIlroy laughed and replied, “I didn’t have as much success as you’re having at such a young age.”

And then he shared what Kim had missed earlier about reaching No. 1. Staying there can be more difficult than getting there. Only two other players have reached No. 1 on more than eight occasions — Tiger Woods and Greg Norman, each with 11.

“The hard work is actually staying there,” McIlroy said.