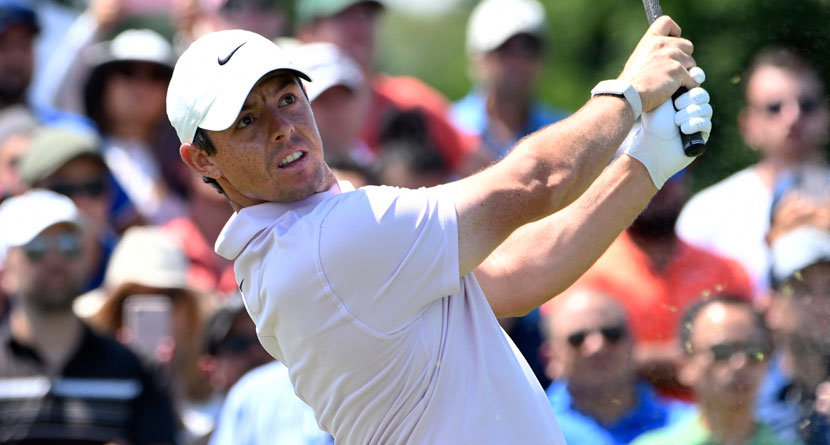 The Rules of Golf have made a lot of headlines this year as the USGA and R&A made some wholesale changes in an attempt to simplify them and speed up play, and one of the changes nearly cost Rory McIlroy two shots during the second round the The Northern Trust on Friday.

Playing his 14th hole of the day, McIlroy hit his tee shot on the par-3 into the greenside bunker and attempted to move what he thought was a small stone behind his ball. Reaching down to remove the stone, which is allowed under the new rules, McIlroy realized that what he believed to be a stone was actually a clump of sand.

Knowing his intent and arguing his innocence, McIlroy called over PGA Tour rules official Dave Donnelly to explain what happened. Donnelly radioed into head rules official Slugger White and the pair confirmed that McIlroy would be docked two shots for touching the sand and therefore improving his lie.

Rory McIlroy thought he was removing a loose impediment from a bunker, but then realized it was just sand.

He alerted a rules official and was given a two-shot penalty.

He was three back of the lead at the time of the penalty. pic.twitter.com/Ayp8zWw9Ei

“The rules are the rules, but I knew that that rule had changed this year, and I just wasn’t quite sure if that was the right ruling that was given on the course,” McIlroy said. “I just wanted to make sure.”

Under the impression that he was being penalized two strokes, McIlroy went on to make a double bogey on the hole, but he was never convinced he should have been docked. He continued his conversation on the 15th hole about his intent and whether he improved his lie or not, and then met with officials after the round, which ultimately resulted in McIlroy not receiving a penalty.

After looking at the replay and consulting with the USGA, White confirmed what McIlroy was saying, “(he) didn’t improve his line of play or his intended swing.”

“They sort of went back and forth a little bit, and then it came down to me and they said, OK, are you comfortable telling us you didn’t improve your lie, and for me, I am comfortable saying that,” McIlroy said. “In a way, it nearly worked in my favor. It was like, OK, I sort of need to get these two shots back, and I had a little bit more intensity the next few holes,” McIlroy said. “I guess my mind set was I wanted to get those two shots back that I had lost, that I thought I had lost in the bunker.”

McIlroy shot a round of 3-under par 68 to move to 9-under par. He will begin the weekend three shots back of 36-hole leader Dustin Johnson.