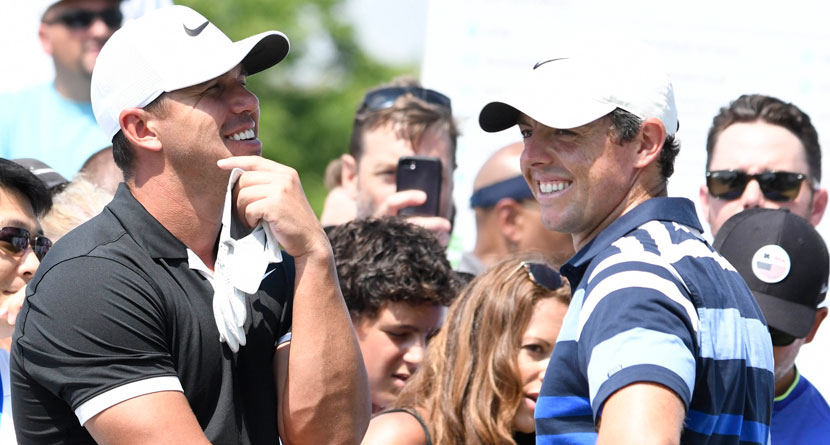 The issue of slow play on the PGA Tour is likely only able to be fixed when the players themselves start taking ownership and accountability over it.

Thankfully for golf fans, two of the game’s biggest and most outspoken stars are taking up the cause: Rory McIlroy and Brooks Koepka.

Speaking to the media ahead of this week’s first leg of the FedEx Cup Playoffs, The Northern Trust, the two spoke candidly about the Tour’s pace of play issue.

“I don’t think it’s fine to do nothing because it’s genuinely a problem in our game,” McIlroy said. “It starts at our level because people try to emulate us. I’ve heard stories of college events and how long they take. There’s no reason why it should take that long.

“For me, I think the guys that are slow are the guys that get too many chances before they are penalized. So it should be a warning and then a shot. It should be you’re put on the clock and that is your warning, and then if you get a bad time while on the clock, it’s a shot. That will stamp it out right away.

“I don’t understand why we can’t just implement that. We are not children that need to be told five or six times what to do. Okay, you’re on the clock, okay, I know if I play slowly here, I’m going to get penalized and I think that’s the way forward.”

Rory and Brooks are fed up with slow play on Tour. https://t.co/3wGZnW8JLd

Koepka reiterated what McIlroy said sitting in the interview chair a few minutes later, calling on the rules officials to start doling out penalties.

“I don’t think anybody likes waiting,” Koepka said. “Especially if you’re going to be sitting on a tee box for 15 minutes to hit your tee shot. I get that you can take a long time for your thought process, but once you’re done thinking about, just go. What else is there to do? That’s been the problem I have.

For McIlroy and Koepka, the pair won’t have any excuse for not playing fast during the first two rounds of The Northern Trust. As the top two players in the FedEx Cup standings, they will play alongside one another on Thursday and Friday.

McIlroy got off to a better start than Koepka, shooting a 6-under par 65 to sit three shots back of first-round leader Troy Merritt. Koepka could only muster a 1-under par 70.