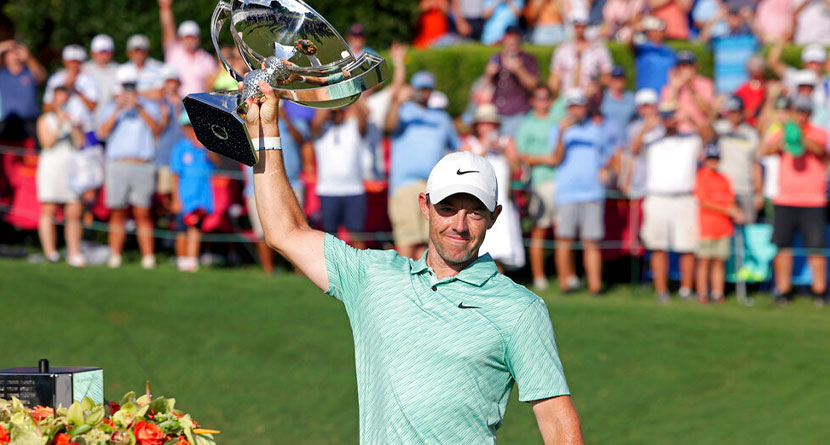 ATLANTA (AP) — This year it became easy to overlook Rory McIlroy’s four majors, 30 wins on four continents and two years at No. 1 in the world. He has been viewed mostly as the strongest voice and staunchest defender of the PGA Tour in its battle against Saudi-funded LIV Golf.

So perhaps it was only fitting that a most tumultuous year for the PGA Tour culminated Sunday with McIlroy holding its biggest prize.

He had the final say with his clubs.

Six shots behind before the Tour Championship started, 10 shots back after two holes, McIlroy rallied from a six-shot deficit in the final round against the No. 1 player in the world and closed with a 4-under 66 to become the first three-time winner of the FedEx Cup.

“It’s in some ways fitting that I was able to get this done today to sort of round off a year that has been very, very challenging and different.”

“It’s the greatest place in the world to play golf.”@McIlroyRory 👏 pic.twitter.com/GEQmIx85Xn

It came at the expense of Masters champion Scottie Scheffler, the No. 1 player in the world who birdied four of six holes Sunday morning to finish the storm-delayed third round at 66 and build a six-shot lead. Not even McIlroy, who birdied the last two holes in the morning to get into the final group, thought he had a great chance.

But then Scheffler never regained his groove, missing fairways and greens and par putts. He made only one birdie in a closing round of 73 and tied the PGA Tour record for losing a six-shot lead in the final round.

“I just didn’t get off to a good start early, but after that I grinded as hard as I could,” Scheffler said. “For whatever reason my swing wasn’t where it had been the first few days this week.”

Sungjae Im fell back with a double bogey on the 14th hole and still managed a 66 to tie for second with Scheffler. They earned $5.75 million.

McIlroy referred to the final round as a “spectacle,” and not just because of the pro-McIlroy crowd that chanted his name along the closing holes.

“Two of the best players in the world going head-to-head for the biggest prize on the PGA Tour, and I hope everyone at home enjoyed that,” he said.

McIlroy needed plenty of help from Scheffler, who never trailed until the 70th hole. Scheffler looked out of sorts early, and McIlroy capitalized. With three straight birdies, he tied him on the seventh hole. And then it was a nail-biter to the end.

It was a stunning display at East Lake that turned on two shots.

McIlroy holed a 30-foot birdie putt on the par-3 15th hole to tie for the lead.

After he flew the green by some 20 yards on the 16th, his pitch was running fast and headed off the front of the green when it hit the pin and settled 7 feet away. He saved par. Scheffler blasted out of a bunker to just inside 10 feet and missed, making bogey that put him behind for the first time all week.

Scheffler badly misread a 10-foot birdie chance on the 17th to tie, sending the Tour Championship to the final hole with $18 million on the line.

Scheffler’s 4-iron on the par-5 18th sailed short and right and into a bunker, and he blasted out over the green. McIlroy went left against the grandstand, took relief and got onto the green for an easy par.

“I wanted to win the season-long title,” Scheffler said. “I’ve had a really great year and I wanted to finish it off with a win here, and unfortunately I wasn’t able to do that.”

McIlroy won the FedEx Cup in 2016 in a playoff. He won the FedEx Cup again in 2019, the first year of a staggered start. This might have been the sweetest of fall, coming off a year in which the PGA Tour has been in a nasty battle with LIV Golf, which already has attracted some two dozen players and now is part of an antitrust lawsuit against the PGA Tour.

It was McIlroy who has declared fierce loyalty to the PGA Tour over the last few years when rival leagues were coming into a view. And it was McIlroy who joined Tiger Woods in leading a momentous player-only meeting last week that led to significant changes ahead for the tour.

So, yes, this had an extra level of satisfaction.

And no, he didn’t mind the burden he carried as the de facto voice of the tour.

“If you believe in something I think you have to speak up, and I believe very strongly about this. I really do,” McIlroy said. “I hate what it’s doing to the game of golf. I hate it.

“I think when you believe that what you’re saying is the right things, you’re happy to stick your neck out on the line.”

Even at the Tour Championship, typically a celebration of the end of the year, there was talk all weekend of more defections coming in next few days. The Daily Telegraph reported three weeks ago that British Open champion Cameron Smith was leaving for LIV Golf, and renewed reports over the weekend confirmed as much.

Two people aware of the moves said Harold Varner III, Marc Leishman and Anirban Lahiri are leaving. They spoke on condition of anonymity because it has not been announced. Cameron Tringale announced his decision on Twitter.

Still to be determined is Joaquin Niemann, whose manager said the Chilean would discuss the options with his father later Sunday.

“Everyone on tour has had to deal with a lot. Even the guys that have went to LIV have had to deal with a lot. It’s just been a very tumultuous sort of era in our game,” McIlroy said. “This is the best place in the world to play golf. It’s the most competitive. It’s got the best players. It’s got the deepest fields. I don’t know why you’d want to play anywhere else.”

With all that speculation, the Tour Championship that looked to be a runaway turned into a dynamic show. And in the end, the tour’s biggest voice had its biggest trophy.