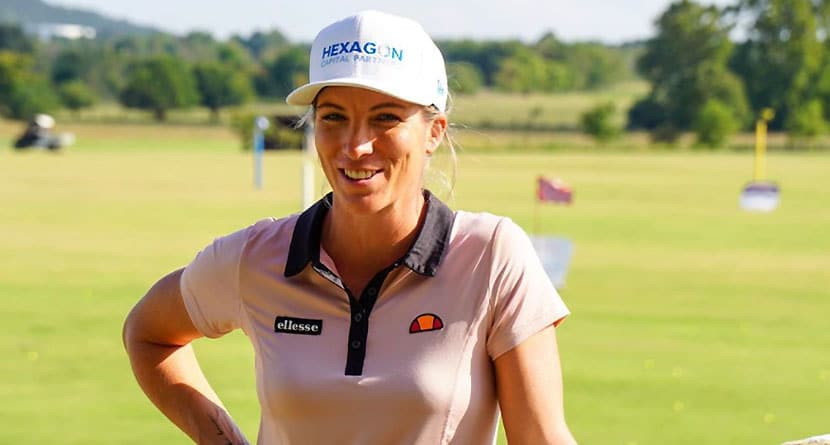 Mel Reid, the 33-year-old who became a first-time winner on the LPGA Tour last week, is one of the most well-liked players on the circuit, and after her performance both on and off the course at the ShopRite LPGA Classic last week, it’s not hard to see why.

After a successful early career on the Ladies European Tour that included Rookie of the Year honors in 2008 and six victories, Reid made the move to the United States and the LPGA Tour three years ago in an attempt to elevate her game.

She broke through on Sunday with a two-stroke victory over Jennifer Kupcho, she of Augusta National Women’s Amateur fame. And while her play on the course was enough to garner more than a few new fans, it was her performance in a question-and-answer guessing game segment with Golf Channel that did more to raise her profile among more casual and less reverent golf fans.

Having to answer 10 questions posed by Golf Channel’s Jerry Foltz, Reid and her caddie Ryan “Dez” Desveaux were tasked with proving how well they knew one another. While the first few were relatively mundane questions and answers — her favorite place to snowboard, her favorite golf moment, funniest players on Tour — Foltz set Reid up to knock a question out of the park towards the end.

After asking Reid what she would do if she weren’t an athlete — open a pub — Reid was asked what her caddie would be if he weren’t a caddie.

His answers are worth a watch 🤣🤣 pic.twitter.com/1ftsjiPnmQ

They wrapped up with a few more questions and answers, but the virgin comment was the highlight.

Further proving her likability, Reid celebrated her maiden victory on the circuit in style, filling her trophy with beers and having a little celebration.

Guess who? Most popular victory in ages on the LPGA. Congrats @melreidgolf pic.twitter.com/iQvFH51pFu

Reid was fined for skirting some LPGA protocols, but she said that was just par for the course.

“Got in a bit of trouble. It wouldn’t have been me if I didn’t get in trouble,” she said. “Yeah, I mean, I obviously took it a little bit easier than I probably would have done normally.

“My life has now changed and for the better, and yeah, I’m definitely going to want to get home to Florida and party up with some friends and really enjoy it.”

But first, she has a major championship to compete in this week at the KPMG Women’s PGA Championship.