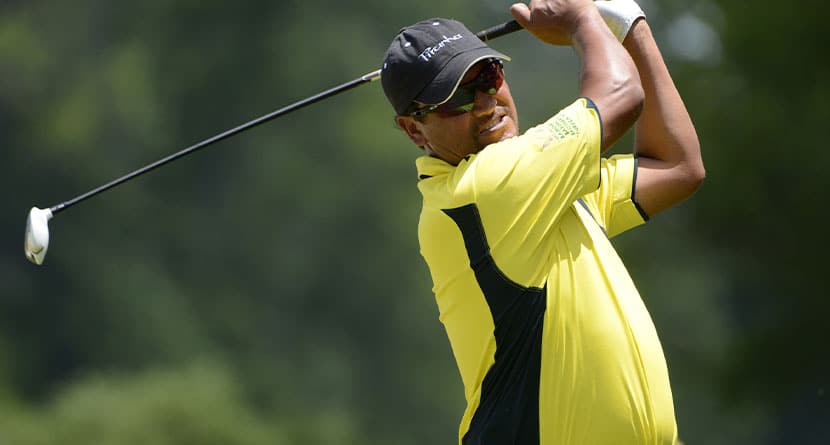 Michael Campbell may not be the most common of household names in professional golf, but the man won the 2005 U.S. Open holding off a charging Tiger Woods at Pinehurst No. 2, so there’s no doubt he’s got game.

However, all he had after the first round of the Senior Open Championship on Thursday were pangs of embarrassment after an unusual rule allowed him to hit a mulligan off the tee following a bizarre sequence of events.

Campbell has a unique pre-shot routine that involves him teeing the ball up and immediately taking a practice swing dangerously close to the ball, which brings back memories of Zach Johnson at the 2019 Masters.

Wow! Zach Johnson is all of us… pic.twitter.com/BvVWA1wBvU

Similar to Johnson, Campbell accidentally made contact with his practice swing, sending a half-hearted fairway wood heading down the fairway at the Sunningdale Old Course.

Today at the Senior Open @MCampbellgolf 🙈

Campbell, who later confirmed on Twitter that this wasn’t the first time he’d done that, was entitled to a mulligan under the Rules of Golf.

Under Rule 6.2b, the Rules state “when you are playing a ball from the teeing area, the ball is not in play until a stroke is made at it. This means that when your ball is teed or on the ground in the teeing area and you make a practice swing that accidentally strikes and moves the ball, you have not made a stroke or moved a ball in play.

“The Rules allow you to simply re-tee that same ball or another ball without penalty.”

While Campbell was able to re-tee, his round was not salvaged by the do-over; he shot a 5-over par 75 to stand 10 shots back of first-round leader Darren Clarke.

Pretty much sums up my day today. @ZachJohnsonPGA I know how you felt 😂

“Pretty much sums up my day today,” Campbell tweeted. “(Zach) I know how you felt.”