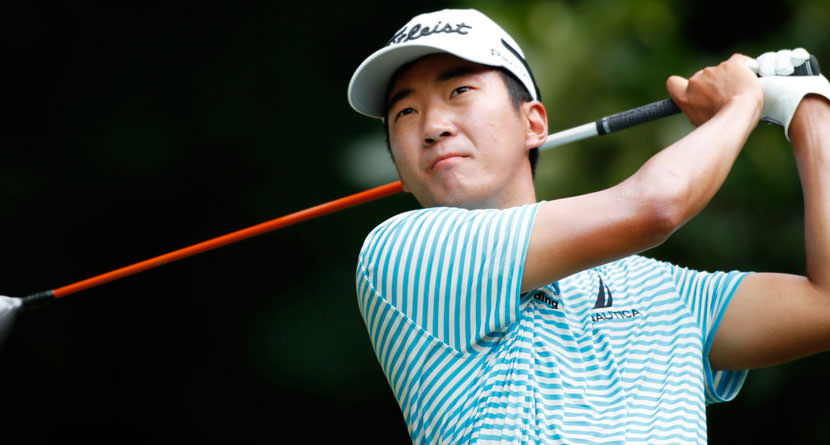 He claims his first PGA TOUR win in style at 27-under and an 8-shot victory.#LiveUnderPar pic.twitter.com/J6EH6SrNfS

Kim began the final round with a five-shot lead, which quickly grew after he birdied his first three holes of the day. Kim had only made the cut in seven of his last 23 Tour starts and notched only one top-10 in 83 career starts on the PGA Tour. On Monday, he’ll be in Scotland to compete at the Open Championship at Carnoustie.

Kim is the latest of the 20-somethings on Tour to break through and find the winner’s circle. Although he had one of the most decorated collegiate careers of anyone on Tour, Kim admitted in his press conference that he couldn’t help but fear that he was being left behind.

“I played against them in college and beat a lot of them in college,” Kim said. “I had a really, really good career at Cal, but you compare it to some of the guys from that 2011 (high school) class — Jordan (Spieth), Justin (Thomas), (Daniel) Berger, Xander (Schauffele) — you can’t help but feel like you’re being left behind. It was just more motivation than anything. You know, without them doing so well I might not be holding this trophy right now.”

“I started playing (golf) when I was eight years old, watching Tiger win all those tournaments,” Kim said. “You know, you say you dream about playing on the PGA Tour, winning on the PGA Tour, but as a kid you don’t really know how hard that is, how much work that takes. But to be sitting here with the trophy, I don’t know, I’m just at a loss for words. I think I made the right career choice.”