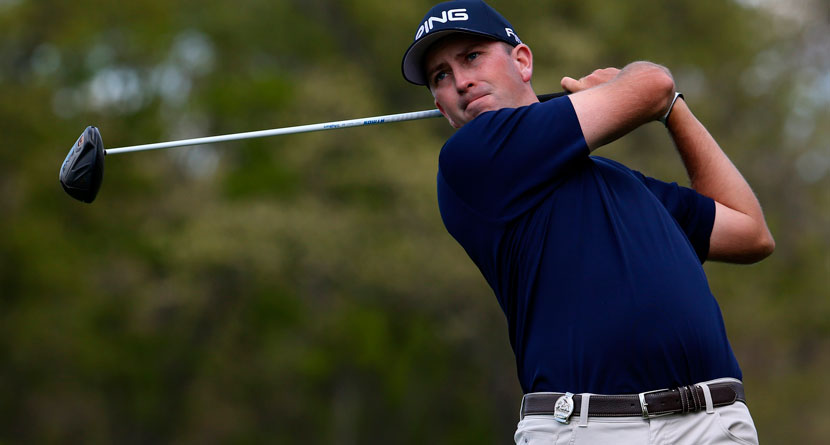 Like with many changes, there are growing pains and with the PGA Tour’s newly-enforced driver testing initiative, the first shoe dropped last week at the Safeway Open in Napa, California.

According to a report from Reuters, five PGA Tour pros had their drivers fail the characteristic time (CT) test, which measures the spring-like effect of a driver’s face by timing the contact between a ball and a clubface.

The USGA has set the legal limit for time of contact at 237 microseconds, allowing for an 18-microsecond tolerance, meaning the test must produce results lower than 257 microseconds. Among the five drivers that reportedly failed the test last week, Michael Thompson’s Ping driver was one of them and he was shocked by the outcome.

“I was in there, but I wasn’t really paying attention. I didn’t think I would fail,” Thompson said, adding that the Ping Tour reps had tested his driver a week earlier. “My driver wasn’t non-conforming a week ago.”

Thompson said he was in favor of the testing, but felt that there needed to be tweaks made to the process, or at least, a better line of communication between the entities and competitors as to what and where on the club was being tested.

Instead of testing the CT of a centered strike that produces the most ball speed, the USGA and PGA Tour are testing “hot spots” on the club that can result in higher CTs, but less ball speed.

“For Ping, (the hot spot is the) high-toe, which is the case for a lot of drivers,” he said. “You know, if you hit it high off the toe, you get a little bit more distance with regard to rollout. However, the ball speed goes down. So you’re not actually gaining speed hitting it off the toe, and no one in their right mind is going to try to hit a driver off the toe.

“I think that upset a lot of players. There was a number of players whose drivers were taken, which is going to happen — drivers go bad over the course of time — but I think a lot of people disagreed with the way that they were conducting the test.”

Thompson said that in order for players and their equipment representatives to ensure they’re not scrambling to build new drivers and go through the testing process the week of an event, they need to know the specifics of what’s going into the CT test so that they can keep their clubs in line with the rules.

Thompson’s other gripe was the way the testing was being leaked to the public.

“I think the biggest issue is the way they conducted the test and where they’re conducting the test,” he said. “It’s supposed to be pretty hush-hush. It’s not supposed to be in public light, and now it’s my problem.

As for the PGA Tour’s response, GolfChannel.com reached out to Tyler Dennis, the PGA Tour’s senior vice president and chief of operations, declined to speak at length about the testing, the results or anything else related to the topic, but he did say the Tour tries “to keep everything as confidential as possible on our end.”

Dennis allowed that a slightly non-conforming driver typically results in negligible distance gains, but the testing is more about keeping a status quo as it pertains to conformity.

“Everyone can feel, week in and week out,” he said, “that we have a level playing field on the PGA Tour.”