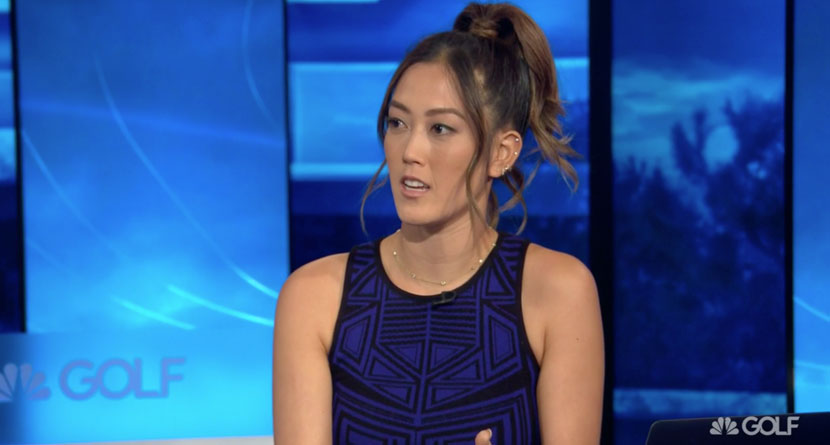 Sunday singles matches at team competitions routinely result in captains making strategic plays with their lineups that almost inevitably turn one captain into a genius and one into the goat.

This past weekend’s Solheim Cup was no exception as European captain Catriona Matthew was lauded for her “brilliant” strategy to backload her lineup with “firey competitors” while American captain Juli Inkster opted to put her studs out in the middle of the order in hopes of retaining or winning the cup before the final few matches were decided.

Tied 8-8 heading into Sunday, the Americans needed to earn six points out of a possible 12 to retain the cup while Europe needed at least 6½. When Inkster’s strategy didn’t result in a red wave, things were going to get dicey down the stretch.

Michelle Wie, who joined Golf Channel’s Golf Central desk as an analyst for this year’s matches, questioned Inkster’s lineup as soon as she saw it.

“The rookies did an amazing job under pressure, but did Juli put too much pressure on them?” Wie asked. “When I saw the lineup, Paige (Mackenzie) and I were both shocked that players like Lexi (Thompson) and Jessica Korda and Lizette Salas were not put in more pivotal roles.

“I think putting Marina Alex and Ally McDonald in the last matches, it could come to them; they were basically some of the anchors. I think Juli had a lot of confidence in her rookies, but she may have had too much confidence (in them).

“Not putting Lexi Thompson and Jessica Korda and Lizette Salas (at the end of the lineup), players who have had experience in Solheims, they were kind of in the middle, which I was kind of shocked. They were not in very pivotal roles. If Juli would have put more pressure on them to lead and get the points going, then maybe, but it was shocking to see the lineup.”

As it played out, the American team reached 13½ points with three matches still on the course. Needing just ½ to retain the cup out of those three matches, the Europeans mounted one of the gutsiest closing stretches in recent golf history.

Stalwart Anna Nordqvist won the anchor match over Morgan Pressel 4&3, leaving two matches on the course with the Solheim Cup on the line. English fireplug Bronte Law made a 15-foot birdie putt on the 16th hole to take a 1-up lead and won the 17th hole with a par over the American alternate McDonald to get Europe another point.

The final match on the course pitted Marina Alex versus the controversial European captain’s pick, Suzann Pettersen who nearly holed her eagle approach on the par-5 18th in an all-square match, but then made the clutch birdie putt to win her match 1-up and give Europe the Cup.