Wie Googled Her Way To A New Putting Grip 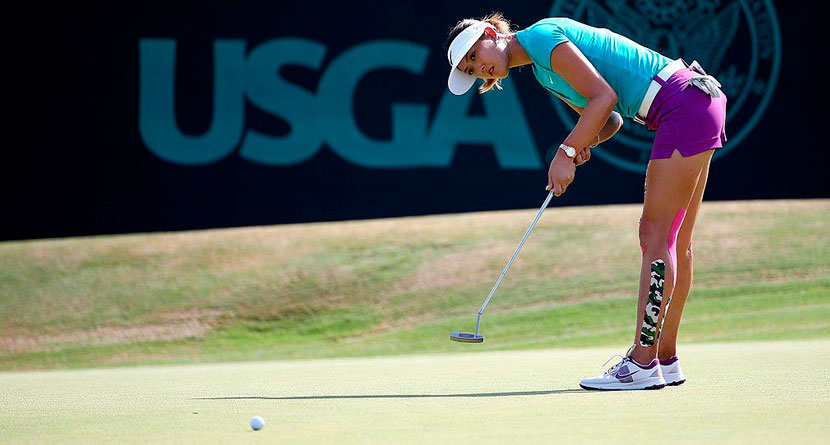 We’re told not to believe everything we read on the internet, but it turns out there can be some very helpful information out there. Case in point: Michelle Wie.

The 27-year-old former phenom has had a career punctuated more by question marks than by exclamation points. While Wie’s long game has rarely been a cause for concern, her work around the greens has resulted in more bad jokes than an amateur open mic night. Her latest putting style was appropriately known as the “table-top,” for obvious reasons.

She’s back! Michelle Wie a shot off the lead at @LPGA stop: http://t.co/xDgSMJaBjv pic.twitter.com/PI3Snfa0a9

The table-top love stalled for Wie and she did what any self-respecting millennial would do: she pulled out her phone and Googled a better putting stroke. GolfChannel.com’s Randall Mell talked with Wie about her switch.

Wie is eager to try out her new putting style this week, having abandoned her unorthodox “table-top” putting stance. She was frustrated missing the cut at the season-opening Pure Silk Bahamas Classic after hitting 34 of 36 greens in regulation but making only three birdies with her table-top stance. She’s going with a more classic upright stance this week, but with the Sergio Garcia-style claw grip.

“I definitely Googled `The Claw,’” Wie said. “You should see my research. I Googled every one. I liked Phil’s (Mickelson) and Sergio’s. I tried everything out, and it feels good.”

Mostly, Wie said she wants to find the fun in her game again this year.

“Last year, I put a lot of pressure on myself, and this year, I’m trying not to do that . . . when I’m out there smiling and enjoying the game, that’s when I do my best,” she said.

The move to go to Google over her instructor, David Leadbetter, is interesting, but he’s not sweating it.

“It’s been a long, long haul, but I still have high hopes,” Leadbetter said. “She still hits some unbelievable golf shots that make me marvel, that make me say there aren’t many girls who can hit shots like that.”

The new grip seems to be paying some dividends already. Through two rounds at the ISPS Handa Women’s Australian Open, Wie is in a tie for 13th place at 5-under par, four strokes back of the leader.

Wie says bye to the ‘tabletop’, hello to ‘the claw’. https://t.co/VasOfq74Sw pic.twitter.com/xs5LDrwqAe