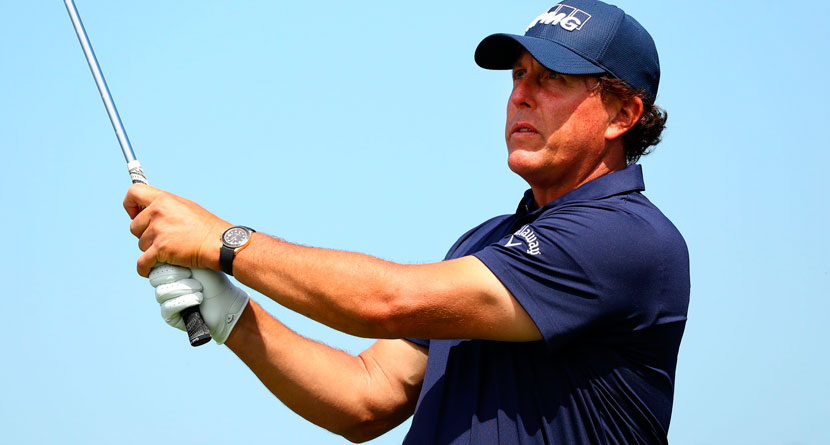 A prerequisite for being a successful professional golfer is borderline irrational confidence. And over his nearly 30-year career, Phil Mickelson has never been accused of lacking in the confidence department.

However, coming off of yet another U.S. Open disappointment last week at Pebble Beach, Mickelson showed some vulnerability and self-doubt in comments he made to the press ahead of this week’s Travelers Championship in Cromwell, Connecticut.

“I’m appreciative of the opportunity, even though I didn’t play my best or didn’t win,” Mickelson said when asked about his T52 finish before throwing a curveball. “I really don’t have many more chances. (I) probably have to come to the realization I’m not going to win the U.S. Open, but I’m not going to stop trying. I’ll keep trying. You never know.”

Phil Mickelson is coming to the realization he “probably” won’t ever win the U.S. Open, but that won’t stop him from trying. https://t.co/4HdVCI4BS9

At 49 years old, Mickelson said the build-up and expectations can no longer be the same because his body simply doesn’t function and perform the same way it used to.

“I certainly haven’t played at the same level of consistency week in and week out that I did back in my 20s and 30s,” he said. “When I play well, I’m able to play at a very comparable level to what I played back at the height of my career. Just not having as many opportunities, so that’s been the hardest thing for me. Having energy levels and recovering and being focused for each shot in four rounds. Out here, the difference is so small between winning and losing.”

The lineup of U.S. Open courses in the coming years is daunting as well despite the past success Mickelson has had at the venues. The 2020 U.S. Open will be held at Winged Foot, site of Mickelson’s most notorious meltdown as he lost a two-stroke lead with three holes to play to finish in second place for the fourth of what would become six runner-up finishes.