Mickelson Once Blew Off a Young Spieth Looking For an Autograph 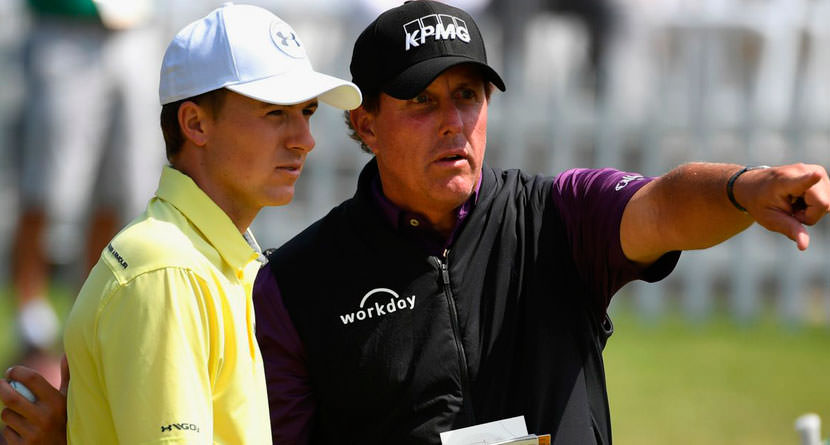 The biggest names in golf have many responsibilities that they need to juggle, all while doing their best to acquiesce to various requests from the fans who pay to see them play.

Phil Mickelson is one of those golfers in high demand, which pulls him in a lot of different directions. One direction he didn’t go in a few years back was Jordan Spieth’s.

A young Spieth was searching for an autograph from his future Ryder Cup teammate as well as Davis Love III at the Byron Nelson event outside of Spieth’s hometown of Houston, Texas. He retold the story during his pre-tournament press conference on Tuesday.

“There was a time that I was out, I think at the Byron Nelson with my dad and Phil Mickelson and Davis Love III were on the putting green,” Spieth said, according to GolfDigest.com. “And I was yelling at them, as I now get annoyed while I’m practicing when I’m getting yelled at, and they were talking and they said, ‘One second.’

“And when they finished, Phil was pulled off in a different direction and Davis came and signed for me. And I thought for the longest time that Phil just blew me off. And Davis was the nicest guy. And Phil, I didn’t care for as much for a little while because of that.”

Spieth rationalized that Mickelson was likely fulfilling a different obligation, but that didn’t mean much to the younger version of himself.

In true Mickelsonian fashion, when told about the autograph snub, Phil told Spieth, “I knew who you were, and I didn’t want to go over there and sign it,” Spieth relayed.