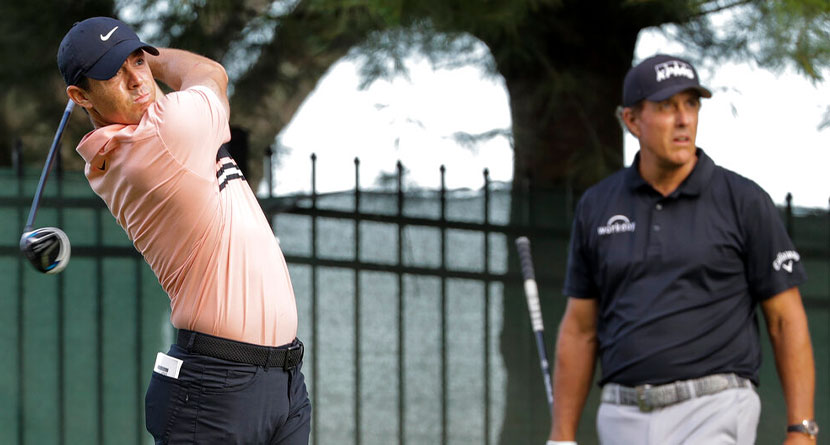 DORAL, Fla. (AP) — The back-and-forth between Phil Mickelson and Rory McIlroy continued Wednesday, with the rhetoric tuned down considerably from some past verbal jousting involving PGA Tour players and those who left for Saudi-funded LIV Golf.

Mickelson complimented McIlroy for his win last week, those remarks coming a day after The Guardian published an interview in which McIlroy — now the world’s No. 1 player again — said the game isn’t benefiting from all the acrimony between the sides.

“I see LIV Golf trending upwards, I see the PGA Tour trending downwards and I love the side that I’m on,” Mickelson said two weeks ago in Saudi Arabia, the seventh of the eight stops on this season’s inaugural LIV schedule.

But Wednesday, in advance of the LIV finale at Trump National Doral, Mickelson’s tone was a bit softer: “Maybe I shouldn’t have said stuff like that, I don’t know,” he said.

“If I’m just looking at LIV Golf and where we are today to where we were six, seven months ago and people are saying this is dead in the water, and we’re past that,” Mickelson continued. “Here we are today, a force in the game that’s not going away.”

Part of Mickelson’s word choice there wasn’t accidental. McIlroy made the “dead in the water” comment in February, around the time that Dustin Johnson and Bryson DeChambeau said they would remain with the PGA Tour. They both left for LIV anyway, lured by signing bonuses reportedly worth in excess of $100 million. Johnson has earned about $31 million more in LIV prize money heading into this weekend’s finale.

McIlroy has made no secret about his feelings toward LIV and the decisions players made to change tours.

“This ‘us versus them’ thing has gotten way out of control already,” McIlroy told The Guardian. “If the two entities keep doubling down in both directions, it is only going to become irreparable. We are going to have a fractured sport for a long time. That is no good for anyone.”

Rory McIlroy: ‘This “us versus them” thing has gotten way out of control’ | Exclusive interview with @mrewanmurrayhttps://t.co/uzZ4tEV9v0

McIlroy returned to No. 1 in the world this past weekend by winning the CJ Cup in South Carolina. Mickelson called it “a great win” and “an impressive victory.”

“I think a lot of Rory,” Mickelson said. “I really have the utmost respect for him, and I look at what he’s done in the game and how he’s played this year and his win last week and No. 1 in the world now, and I have a ton of respect for him.”

LIV Golf’s finale is a team-only event that starts Friday and ends Sunday, with a $50 million purse — including $4 million apiece to each member of the winning four-man team. The tour is funded by Saudi Arabia’s sovereign wealth fund, and players who have been drawn to the large prizes have been banned from playing on the PGA Tour.

Lawsuits involving LIV players’ participation in PGA Tour and European tour events are ongoing on both sides of the Atlantic. And there’s uncertainty about who will be allowed to play in the Ryder Cup.

“I’ve always wanted to play Ryder Cups and have played with as much passion as anyone else that I’ve ever seen play a Ryder Cup,” said Ian Poulter, who has played for Europe in seven Ryder Cups and been on the winning side five times.

That was in response to McIlroy telling The Guardian that he felt “betrayal, in a way,” that many of his past Ryder Cup teammates have gone to LIV in moves that “jeopardize” their future eligibility.

“I would like to think the Ryder Cup means as much to them as it does to me,” McIlroy said. “Maybe it does. But knowing what the consequences could be, I just could never make that decision.”