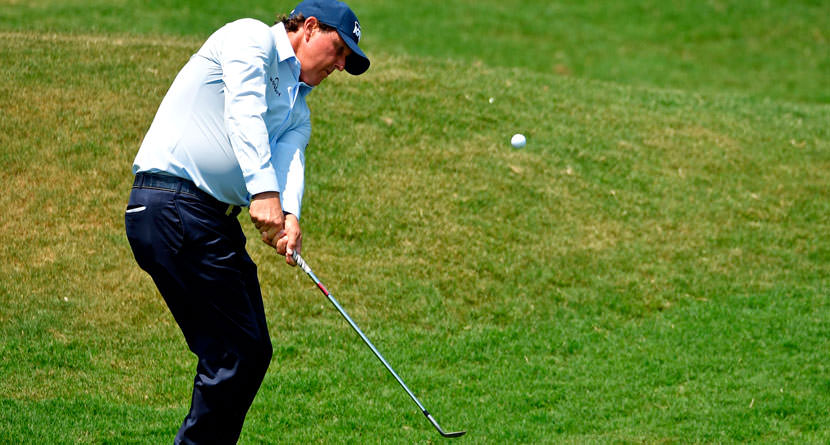 Phil Mickelson has long held one of the world’s best short games. Just to watch him work around the green can be a master class in short game management, but to hear Phil explain his rationale is another level of expertise.

Arizona Cardinals wide receiver — a certified golf nut — Larry Fitzgerald and Dennis Chack, a vice president at FirstEnergy Corporation, drew Mickelson in this week’s A Military Tribute at the Greenbrier Pro-Am on Wednesday. And with some time to chat between holes, Mickelson explained his entire chipping philosophy at a decibel level able to be picked up by Golf Channel reporter Chantel McCabe.

“I’m delofting it by moving it way back, right? So I want at least 60 degrees,” Mickelson said. “So I have it way back, my weight is way forward, you can see my back foot is just resting there. All I do is I just pick the club up and just let it fall on the back of the ball, and it’s really not that hard a shot. And it just comes off hot. So you actually want more loft and it’s going to be easier – I’m going to go to a 64-degree wedge – it’s going to be even easier with the extra loft because it won’t come out as hot. So I have to get up quick, it’s way back in my stance, weight’s way forward, I’m just barely balancing on my rear foot, and you see how that comes out even softer. Anyway, that’s the deal.”

Feeling there was more to be discussed, Mickelson called over Chack to go into more detail about chipping with he and Fitzgerald.

Phil Mickelson played in the pro-am @GBRMilitary with @LarryFitzgerald Hear about his lengthy mid-round short chipping lesson on @GolfCentral at 6 eastern. (Phil’s that is!) pic.twitter.com/5FCxZzGeHD

“So what happens is your weight then gets leveled out and you try to scoop it and you can’t do that. The third thing is, when you chip, your arm and club need to have an inverse line. Most people have this type of V (points to club and arms), it needs to be that type of V. And once it’s locked in, it’s easy to hit, so the leading edge stays down.”