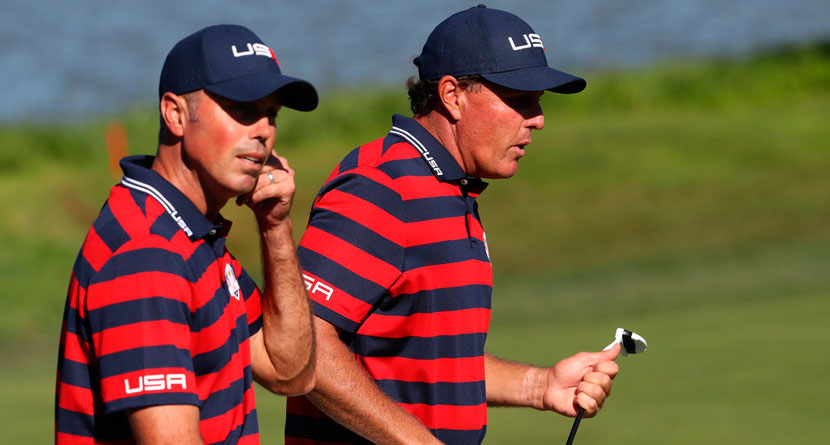 His on-the-course play has been exquisite with the 41-year-old winning two events, finishing runner-up twice and making over $6 million dollars. Off the course, however, has been a different story.

The aftermath of Kuchar’s victory in Mayakoba last November leaked well into 2019 and, until Tiger Woods won the Masters in April, could be argued to have been the biggest story in golf up to that point.

The assertion from golf fans and media personalities that Kuchar hadn’t done right by his local caddie, David “El Tucan” Ortiz, by only paying him a $5,000 cut of his $1.3 million prize pool — he would later supplement his payment with $45,000 more.

“The caddie thing was a tricky situation,” Kuchar said ahead of this week’s Scottish Open.  I feel like the difficult situations you get in turn you into — you learn from those situations. You don’t learn from victories very often. You learn from your setbacks, and I think that’s something where I’ve certainly learned from.

Aside from the El Tucan payment, Kuchar has made news for a pair of rules controversies that included a concession dispute with Sergio Garcia and a questionable plea for relief at last month’s Memorial Tournament.

"The things my grandma was hearing were really tough."

Matt Kuchar opened up about his controversial season, including difficult talks with his grandma and how advice from Phil Mickelson has kept him sane: https://t.co/7brNFlBaLt pic.twitter.com/7duFo3ZgTi

The various on-course brush ups caused irreparable harm to Kuchar’s “good guy” reputation in the eyes of many, and as a result, Kuchar has dealt with some tough questions from inside his own family.

“Sure, it was difficult,” Kuchar said. “I don’t do ­social media, so that helped to not see much. However, the things my grandmother was hearing and talking to me about was really tough.

“I’ve kind of always been that kid who had made my parents and grandparents proud and to see them hear some of the things said about me was a position I never wanted to put them in, and that was very, very difficult.”

Kuchar said that his extended family on Tour has been helpful as well, and some of the best advice he’s received has come from Phil Mickeson.

Mickelson is no stranger to controversy — he of insider trading accusations and hitting a moving ball at the U.S. Open — has had his fair share of controversial moments in his three decades in professional golf. With that experience, Kuchar said Mickelson has been a great source of knowledge.