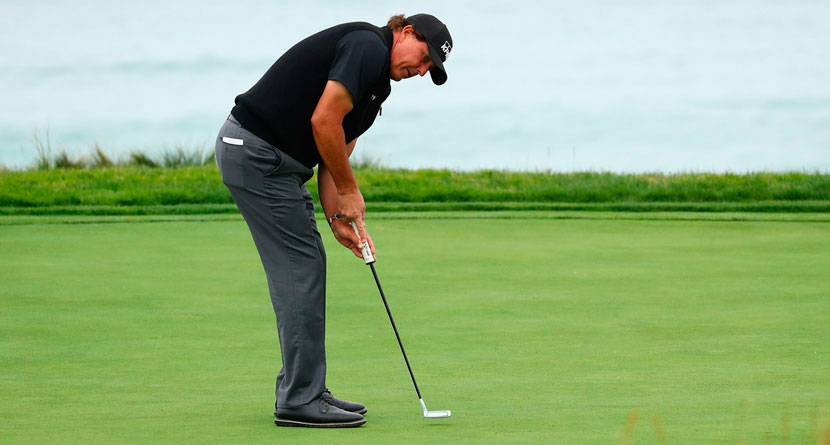 All eyes are on Phil Mickelson this week as he attempts to become just the sixth man in the history of competitive golf to complete the career grand slam at the U.S. Open.

However, it was Mickelson who took his eyes off of the prize on Thursday at Pebble Beach during his first round.

Playing a course he’s won on five different times, including earlier this year, Mickelson got off to a rocky start on the seaside links. After making pars on the first two holes, Mickelson was in line for a third in a row on the par-4 third.

A perfect drive left Mickelson just 95 yards into the green from the left side of the fairway, but he was unable to stick it close in two. He lagged a 40-foot birdie putt to within two feet of the cup, and then had a brain malfunction.

Phil Mickelson misses “shortest putt of any player on this tour ever,” according to Paul Azinger, who may have a point … pic.twitter.com/wCGCL1isLl

Fox play-by-play man Paul Azinger jumped in and said, “That might be the shortest missed putt of anybody’s career on this Tour.”

While perhaps a bit hyperbolic, the shock of the miss resonated as Mickelson marked his next two-footer and walked away in disgust.

Even after the round, Mickelson seemed to still be in disbelief over the missed shortie.

“I missed a one-footer on 3. I flinched,” he said. “My concentration… I should be able to tap that in. But I ended up… anyway, I flinched on (that) one.”

Still, Mickelson doesn’t see himself as shooting himself out of the championship after a 1-over par opening round.

“It’s not disappointing at all. You stay around par at the U.S. Open, you’ll be okay,” he said. “And I just need to go out and shoot something in the 60s tomorrow and I’ll be in a good spot in the weekend. I’m playing well enough to do it.

“I’m hitting a lot of good shots. I’m starting all my putts on my line. I’ve got to get a little more connected to the hole and get the ball in and score. I think it’s going to get better each day. I feel like I’m playing really well.”

Mickelson tees off on Friday at 4:58 p.m. ET with Dustin Johnson and Graeme McDowell.