Mickelson Not Clear Of Insider Trading Scandal Just Yet 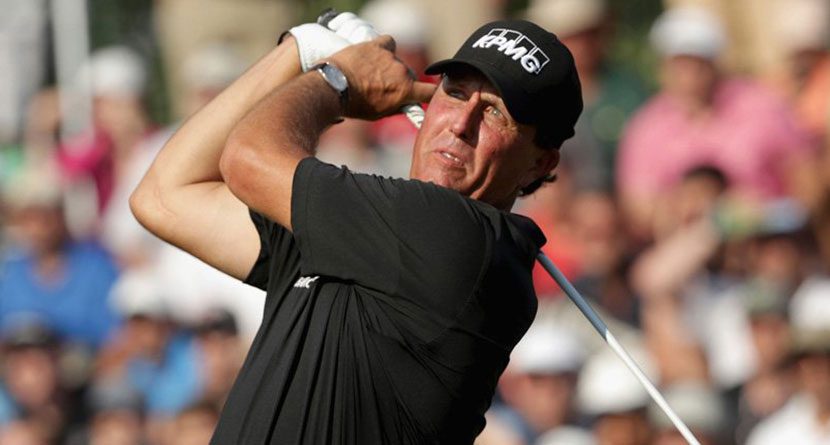 Phil Mickelson has done enough to not have to sweat making the 2016 American Ryder Cup team, but his other biggest concern this year may not go away quite as simply.

Golf.com’s Michael Bamberger spoke to no less than five legal experts who all came away with the same feeling: Mickelson lucked out not being charged. However, the story doesn’t end there and likely, neither does Phil’s involvement with it.

If only we could sweep Phil’s recent out-of-Billions debacle under the clubhouse rug. You know: his alleged debts to the gambler Billy Walters; the money Phil made (and eventually forfeited) in his too-good-to-be-true stock trading.

Can’t be done. You know the phrase “Don’t make a federal case out of it”? This is one. Prosecutors have been after Walters for decades (five indictments), and if he goes to trial on this case, the “professional golfer Philip A. Mickelson,” as the SEC refers to Lefty in its complaint, will likely be a reluctant witness for the government.

Meanwhile, Phil is preparing to take over the old Bob Hope tournament while lawyers, armchair and otherwise, are studying the Tour’s Conduct of Players code. It calls for a minimum two-year suspension for a player who associates “with persons whose activities, including gambling, might reflect adversely upon the integrity of the game of golf.” Billy Walters has done a courtroom dance four times but walked out a free man each time. Still, Phil and Bill hanging in the desert is not exactly Arnie and Ike.

Under cross-examination, Phil’s gambling and debts may be exposed in ways that would leave Commissioner Finchem pining for his old problems: John Daly’s drinking, Tiger Woods’s serial adultery, Dustin Johnson’s failed drug tests. The SEC alleges that Mickelson made nearly $1 million by acting on a 2012 stock tip about Dean Foods given to him by Walters, who was allegedly sharing, and trading on, “material nonpublic information.” Mickelson, according to the SEC, then used his ill-gotten gains to “partly” repay his gambling debts to Walters.

As pointed out in the piece, not only could this scandal have a lasting effect on Mickelson’s legacy, it could also be the final salvo of outgoing commissioner Tim Finchem. How he handles Mickelson under the Tour Conduct of Players code as well as an other unflattering tidbits that could come out in a trial will be talked about in the same breath as the Tour’s ongoing litigation with Vijay Singh.