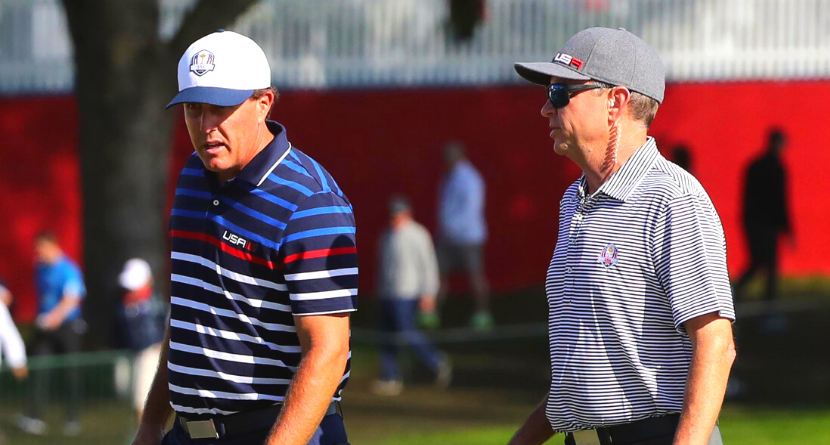 An American Ryder Cup captain has finally acknowledged the elephant in the room, albeit in indirect terms. Though surprisingly enough, the awkward subject came up unprompted.

Speaking to the press ahead of this week’s RBC Heritage, Davis Love III — who’s helmed two Ryder Cup squads — was asked for his take on why his newly appointed Presidents Cup vice captain Fred Couples has seemingly never sought to lead his home country against the Euros.

“He could still be Ryder Cup captain,” Love said. “We may have to fill a gap somewhere now. Our order’s kind of messed up right now. So maybe Fred would be great [for a] home game in New York.”


Ouch. The home game he’s referring to is, of course, the 2025 matches at Bethpage Black, the captaincy for which seemed all but promised to Mickelson. But that was long before Lefty became embroiled in a feud with the PGA Tour over what he deemed its “obnoxious greed,” pledging his support for Greg Norman’s Saudi-backed splinter tour in a high-stakes leverage play that mushroomed into a public relations nightmare.

Mickelson’s public apology and subsequent exit from the sport were much too fresh when the Americans introduced their 2023 Ryder Cup captain, Zach Johnson, at a press conference in early March. And so Johnson, who’s also serving as a Presidents Cup vice captain under Love, was unwilling to engage on the touchy subject.

“Well I’ll say this, Phil Mickelson is a friend of mine on and off the golf course,” Johnson said, “and um, I’m going to leave it at that.”

The six-time major champion has reportedly gone dark, declining to answer messages from his peers as he continues a period of self-reflection. It’s still unclear whether Mickelson intends to defend his title at the PGA Championship next month. Augusta National chairman Fred Ridley insisted Mickelson wasn’t disinvited from the Masters, and he filed for a spot in the U.S. Open field ahead of the April 13 deadline.