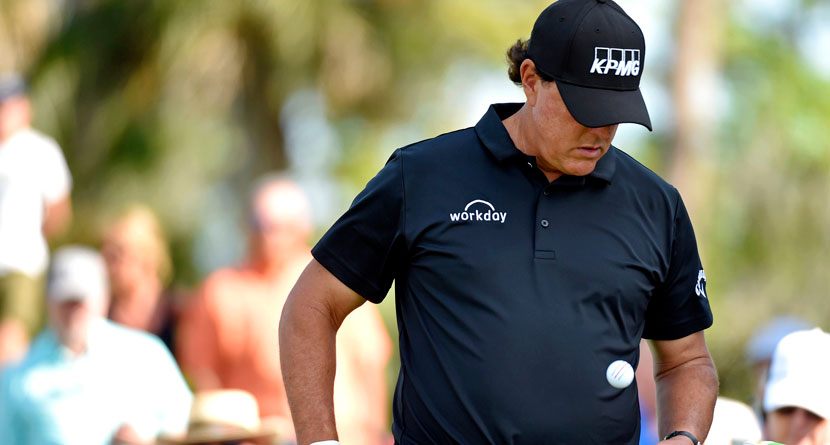 The same college admission scandal that has embroiled GFore founder and designer Mossimo Giannulli also has direct ties to Phil Mickelson, the five-time major champion announced on Thursday following the completion of his first round at The Players Championship.

The ring leader of the entire operation, Rick Singer, is facing up to 65 years in jail after he was arrested and plead guilty to four federal charges tied to a scheme.

Our family, along with thousands of others, used Rick Singer’s company to guide us through the college admission process. We are shocked by the revelations of these events. Obviously, we were not part of this fraud, our kids would disown us if we ever tried to interfere.

After his round, Mickelson released a statement saying that he and his wife, Amy, had used Singer’s company’s services, the Edge College & Career Network, also known as “The Key,” to assist in with the college admissions process for all three Mickelson children.

“Our family, along with thousands of others, used Rick Singer’s company to guide us through the college admission process,” Mickelson tweeted. “We are shocked by the revelations of these events. Obviously, we were not part of this fraud, our kids would disown us if we ever tried to interfere.”

“He was highly recommended by numerous friends that checked out, so we ended up using him,” Mickelson said. “Where he and his company were helpful was helping our kids, who have such different personalities, to find the best place for them. And then knowing going in what you need to do academically, score-wise, to be able to get there.”

According to Mickelson, he and his family have looked at over three dozen colleges and universities based on recommendations from Singer’s company, a process Mickelson described as “confusing.”

Mickelson’s oldest daughter, Amanda, is a sophomore at Brown University.  His daughter Sophia and son Evan are a junior and sophomore in high school, respectively.

“Our kids are, schools are like fighting to get them. And I say that as a proud dad. Their grades and their outside activities, and their worldly views on things have colleges recruiting them,” he said. “We’re not a part of this. Most every family that has used the company is not a part of it. So that’s why I think we’re all surprised.”

Mickelson, who wears GFore footwear, fired a 2-over par 74 in the first round of The Players Championship.