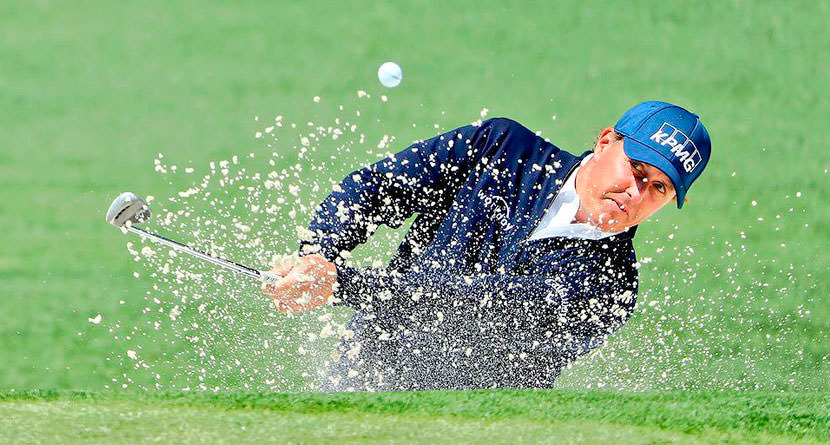 Phil Mickelson rarely is made to look like a weekend golfer out of a sand trap, but that’s exactly what happened on Thursday at the Houston Open during a rain-shortened first round.

After getting off to a red-hot start to the day, shooting 6-under par 30 on his outgoing nine, Mickelson had three birdie looks inside of 25 feet in four holes on his back nine, yet was unable to get any of them to fall. Looking for a spark to help him jump to the top of the leaderboard, he went pin-seeking at the par-3 14th hole only to come up short-sided in the bunker.

Typically, this is a non-issue for Mickelson who ranks eighth in sand save percentage and seventh in scrambling on the PGA Tour this season. However, a poor bunker shot resulted in a second bunker shot from his footprint. He barely escaped the sand after that and was forced to try and chip in for his bogey.

Stuck in the sand.

The resulting double bogey knocked him from 6-under par to 4-under par. Lefty could only manage pars over his last four holes, but again not for lack of quality opportunities — his longest birdie putt over the last four was 20’10”.

Mickelson’s 4-under par 68 put him in a tie for 26th when play was suspended due to darkness. There was a two-hour delay to the start of the first round as a result of rain. 33 players will have to finish their first rounds on Friday morning.

The good news, however, is that there is a good forecast for the remainder of the week at the Country Club of Houston meaning the tournament should end of time and there won’t be any delays for those who are planning to head to Augusta National on Sunday evening.