Mickelson’s Caddie Has Both Knees Replaced 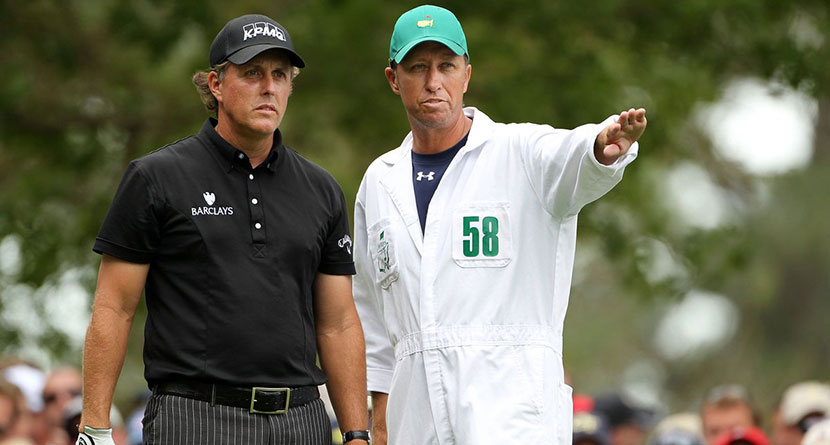 Phil Mickelson often finds himself in some pretty precarious situations on the golf course. As his caddie, Jim “Bones” Mackay treks to those same spots with the only difference being he’s carrying a 50-pound Tour bag.

As if the mental warfare Bones must engage in on a hole-by-hole basis with Mickelson wasn’t enough to wear someone out, the looper has had some physical limitations lately as well. Mackay recently underwent surgery to repair some of the damage caused by walking the most famous golf courses in the world on a week-to-week basis.

GolfDigest.com’s Dave Shedlowski spoke to Bones about the surgery, which had an interesting twist.

It turns out that it wasn’t just one surgery that Team Mickelson underwent last month. It was two … or three, depending on how you choose to count it.

“It’s a good question. I don’t know if you say I had one or two operations,” said Jim “Bones” Mackay, the longtime caddie for Phil Mickelson, who had both knees replaced on Oct. 19, the same day his boss was having sports hernia surgery.

Though the two have worked together for 25 years, the scheduling of their respective procedures was coincidental. “We didn’t even talk about it. We were both in a hurry to get it done, and it just happened to be the same day,” Mackay said. “The next day we were texting back and forth. ‘So, how are you doing?'”

For about a decade Mackay hasn’t been doing well, struggling to walk without pain. Even as a kid he remembers having trouble with them, but they have gotten progressively worse over time despite several arthroscopic operations, cortisone shots and gel injections. Dr. Ted Firestone, who like Mackay is a member at Whisper Rock Golf Club in Scottsdale, Ariz., performed the procedures at North Scottsdale Hospital.

“The doctor told me that what they found was definitively worse than they thought it was,” Mackay said. “Forget about being a caddie, he said, basically my knees did not fit together well at all. If I hadn’t gotten it done, I was probably risking something happening during the season and then being out a long time.”

Despite having to learn how to walk again, Mackay said that his rehab was going well and he plans to be on the bag when Mickelson makes his return to the PGA Tour towards the end of January in the CareerBuilder Challenge.