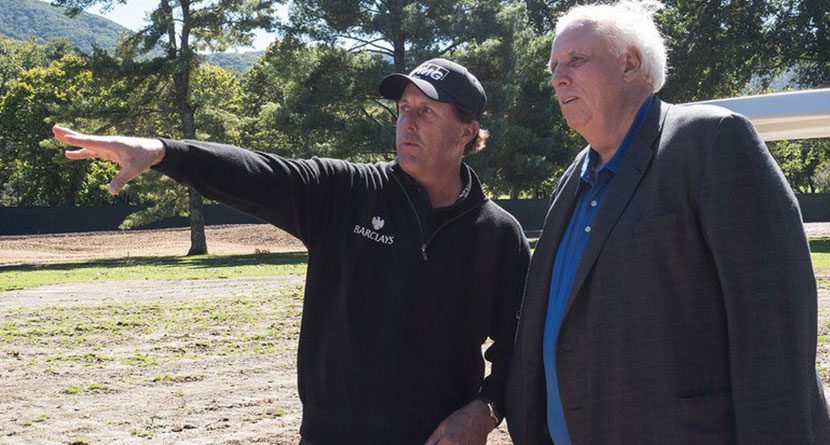 The last big news to come out of the Greenbrier Resort in White Sulfur Springs, West Virginia was that of devastating flooding. Now, however, the historical resort is putting the pieces back together with the help of one of the most recognizable golfers in the world.

Phil Mickelson and his design company, Phil Mickelson Design, began their work renovating The Greenbrier Course at the resort, previously the host of the 1979 Ryder Cup and the 1994 Solheim Cup. The PGA Tour event at the resort is played on The Old White TPC course.


The resort released a statement about Mickelson’s involvement on Thursday.

Phil Mickelson Design (PMD) has begun work on the Greenbrier Course at The Greenbrier Resort in White Sulphur Springs, W. Va. The course was one of several at the sprawling property that suffered severe damage in a major flood on June 23.

Seth Raynor designed the Greenbrier, which opened in 1929. It hosted the 1979 Ryder Cup won by the United States and has been one of the most popular of the resort’s courses.

“I’ve always been a big fan of Seth Raynor’s work,” said Mickelson, who recently was named The Greenbrier Resort’s PGA TOUR Ambassador. “My goal is to stay true to his design concepts while updating the course to challenge and excite generations to come. By restoring the Greenbrier to its full glory, we’ll help the town and region recover from the devastating flood damage.”

Earlier this month, Mickelson spent two days on the property with owner Jim Justice. They spent hours touring the land with PMD co-designer Rick Smith, design director Mike Angus, and Greenbrier Resort golf staff. Phil also visited nearby neighborhoods and met with several families that had lost property and homes in the flooding.

Construction on the course is slated to get underway in January 2017, and the construction is scheduled to be completed by November. The resort is planning to reopen the course in the spring of 2018.