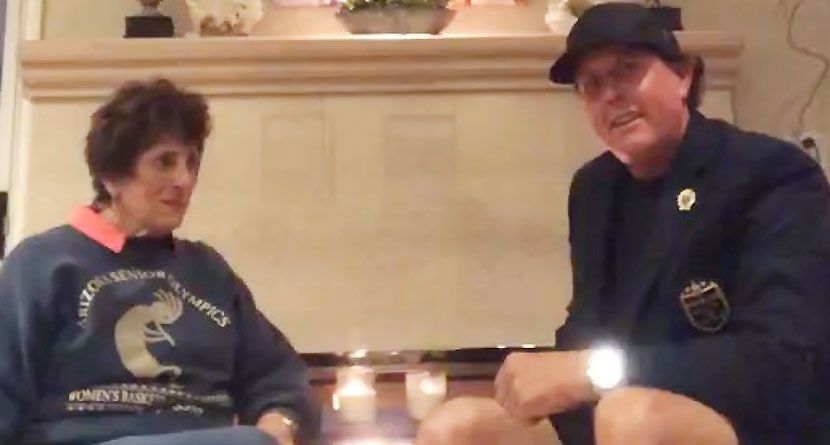 In Phil Mickelson’s inaugural “Phireside With Phil” post, the 5-time major champion promised that he would be “sharing some interesting stories that have taken place through the years and will hopefully have some guests in the future, too.”

Through two editions of the social series, Mickelson has made good on both of those promises as he shared an incredible story from a weather-delayed Memorial Tournament two weeks ago and on Saturday, shared a story of young Phil as told by his mother, Mary.

In the two-candle, real fireplace edition, Mary Mickelson relayed a story of her son sneaking out before a Thanksgiving dinner to play some golf.

A special 2 candle, real fire edition of Phireside with Phil with my first ever guest, my mom Mary. #PhiresidewithPhil

“Four or five hours go by, all the food is on the table… where’s Philip? He’s no where to be found. I looked at my husband and he looked at me; we knew where he was. He paid the kid next door to drive him down to the golf course.”

Naturally, the Mickelson parents were correct. Inviting their guests to dig in and not wait for them, Mary and Phil Sr. hopped in their car, headed to the course and spotted their son on the far end of the property.

They hopped in a cart, and as Phil saw them approaching, he shook his play partners’ hands and started to put some distance in between himself and his parents and the people he was playing alongside.

From the cart ride in and all the way home, Mary said that no words were spoken, but she knew she had finally got him dead to rights.

“We get out of the car, he looks me in the eye and I look him in the eye, and he says, ‘Mom, every day I don’t practice is another day until I’m great.’

“I’m thinking to myself, ‘wow, he did it. That was a great answer. There was no punishment, it was done.”

Phil wrapped up the post with the moral of the story from both sides of the equation.

“You see kids, playing on a parent’s worst fear of holding you back is the greatest way to get what you want,” he explained. “And parents, if you’re listening, don’t fall for it.”