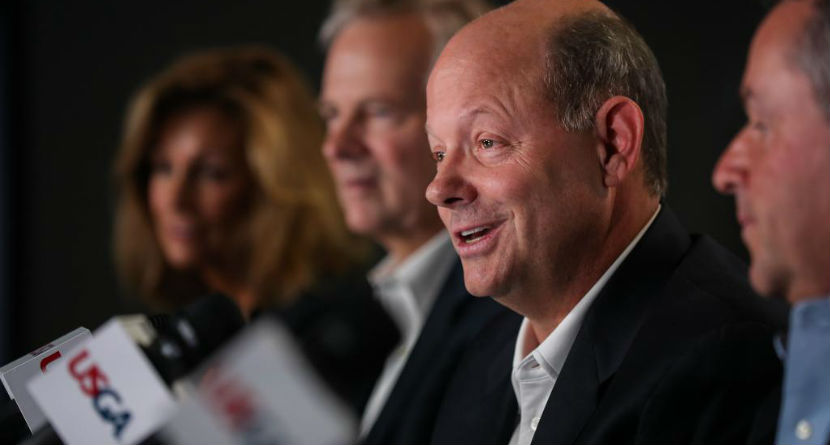 The mastermind behind the setup of the golf’s toughest test had some interesting things to say about a growing concern in golf; green speeds. Speaking during the U.S. Open Media Day at Erin Hills in Wisconsin earlier this week, USGA’s CEO and executive director Mike Davis was asked about the green speeds the players can expect during the 117th playing of the championship. As we all know, the USGA has a tendency to rev up the stimp meter on a mission to protect par at all costs. However, according to Davis, just because the greens are quick during the major, doesn’t mean he believes it is necessarily a good thing for the game in general.

Golf Channel’s Will Gray has the report:

“I will say, and we’ve said this publicly before, too, this notion that good greens have to be fast greens is bad for golf,” said Davis, the USGA’s CEO and executive director. “It’s just not good.”

Green speeds have been a focal point at each of the last two U.S. Opens. Many players were outspoken about the splotchy surfaces at Chambers Bay in 2015, while slick conditions led in part to a penalty that nearly cost Dustin Johnson the title last year at Oakmont.

Erin Hills will host the tournament for the first time next month, and Davis doesn’t anticipate any issues on greens that he described as “wonderfully conditioned.”

USGA’s Mike Davis: ‘This arms race to get fast greens is not a good thing for the game.’ https://t.co/5CJphTtirR pic.twitter.com/6lEud7QKAs

“I can’t remember coming into a U.S. Open where the greens were this smooth,” he said. “When you hit a putt, if you get it on the right line, the right speed, it will go in here, and we don’t expect to see many things hit and moving sideways.”

Davis notes that the greens at Erin Hills next month will be “fast,” and the organization’s course setup style has likely contributed to the growing trend toward slick surfaces. Despite those points, Davis reiterated that courses should re-think their approach on the greens when it comes to everyday play.

“It’s costing the game more money to keep greens fast. It compromises in some cases the health of the greens. It compromises the architectural integrity of the greens sometimes. It certainly hurts pace of play,” Davis said. “We would just say that, taking off our U.S. Open hats for a second, that this arms race to get fast greens is not a good thing for the game of golf.”

This will be the first time Erin Hills will host the national championship, and along with the greens being quick, expect that it will be long (although it won’t necessarily play long). The course actually measures 7,693 on the scorecard, however, according to Mike Davis, the yardage will vary on a daily basis depending on the wind conditions and firmness.