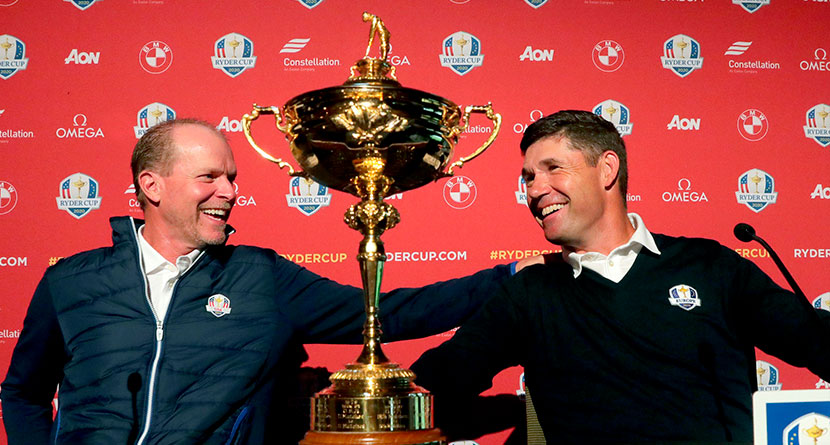 Tuesday afternoon brought another wave of cancellations and postponements across professional golf’s largest Tours, including a bombshell report by The Telegraph’s James Corrigan that the Ryder Cup would be postponed to 2021 due to coronavirus concerns.

Cancellations of four more PGA Tour events through mid-May, the USGA’s move to cancel two events and local qualifying for the U.S. men’s and women’s Opens in their current forms as well as the postponement of the European Tour’s Andalucia Masters came as no major surprise given the coronavirus pandemic and recommendations made by the United States’ Centers for Disease Control and Prevention to suspend all activity that would gather 50 or more people in one place.

However, the news took a larger turn when it was announced that PGA of America’s two biggest events, PGA Championship at Harding Park and the Ryder Cup, set to be contested at Whistling Straits in September, would be postponed. The PGA officially announced the former, while a report claimed the latter.


“Throughout our evaluation process, we have been committed to following the guidance of public health authorities and given the coronavirus shelter-in-place order in effect in San Francisco, postponement is the best decision for all involved,” PGA of America CEO Seth Waugh said in the organization’s official announcement. “This is a reflection of a thoughtful process. We are and have been working in concert with Commissioner Jay Monahan and our partners and friends at the PGA Tour to find an alternative date that works for all. We are all very hopeful for a great outcome.”

The 2020 PGA Championship has been postponed.https://t.co/hnOHbKTeTb

While the PGA Championship began searching for a new date, conflicting reports emerged about the future of the Ryder Cup. Corrigan reported that the decision to move the biennial matches between the U.S. and Europe was multifaceted, and was aided by the desire to move the competition off of an Olympic year.

“There would be far bigger gains to be made in advertising and marketing and everything in a non-Olympic year,” a source told The Telegraph.

Corrigan also made mention of a four-month infrastructure build-up that would require getting underway at the height of the coronavirus pandemic, while a source relayed that there is “zero chance” the Ryder Cup would be played without spectators.

Reports today that the 2020 @RyderCup is expected to be postponed are inaccurate.

Corrigan, however, stood by his story in which he laid out the series of events that would take place over the next few weeks that would ultimately result in an official decision. Corrigan reported that the European Tour will be holding a board meeting next week “with a Ryder Cup steering meeting a week later and it is then when the suspension could be ratified.”

Should Corrigan’s report come to pass, the matches would return to their odd-numbered year cadence, which it held until the September 11, 2001 attacks postponed the event into even-numbered years.