Morikawa The Latest Case Study In A Bizarre Collapse 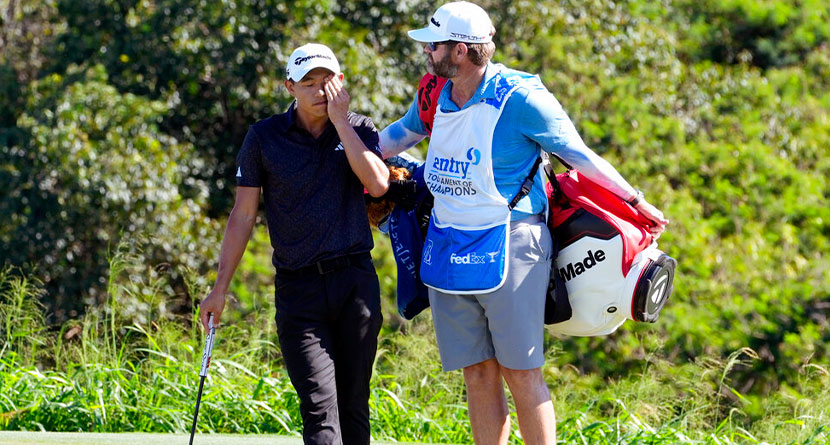 State-of-the-art video boards on the PGA Tour don’t tell the whole story. The numbers were enough to tell Jordan Spieth what happened to Collin Morikawa at Kapalua.

He just didn’t know how.

Morikawa was leading the Sentry Tournament of Champions by six shots at the start of the final round. He was leading by six at the turn. And then he wasn’t.


Spieth has seen this before, even if he didn’t see this particular one.

Spieth also turned a five-shot lead into an eight-shot win at Kapalua, and he never let anyone get closer than three shots to him over the final 54 holes at the Masters for his first major championship at age 21.

“It just gets really challenging when you get in that position because if you win, you were supposed to. If you lose, it’s the worst thing ever,” Spieth said. “I think that mentality is just what you can’t have creep in, but it’s also human to have that happen. I think he’s gone a little while without winning, so there’s that, too.

“So it’s not crazy. It doesn’t mean he won’t go win five events this year, either.”

This one was crazy.

Instead of ending 14 months without winning, Morikawa became a footnote in PGA Tour history as the ninth player to lose a six-shot lead in the final round.

The Morikawa meltdown stood out because it happened without warning. He was bogey-free for the first 67 holes. He kept giving himself good looks at birdie.

The only truly bad shot was Morikawa blading his 25-yard bunker shot over the green on the reachable par-4 14th.

His 5-wood to the par-5 15th peeled off just enough to tumble down a slope, leaving one of the daunting pitches on the course — elevated green, a tight lie with a thick strand of grass going into the strike of the ball. Morikawa muffed it and made bogey.

And then his wedge to the 16th came up just short enough to catch the false front and tumbled back into the fairway.

Rahm, meanwhile, motored his way to a 10-under 63 and won by two. This is not unusual for the Plantation Course at Kapalua. Four years ago, Xander Schauffele was five behind and shot 62 to win by one.

“Don’t know what I’m going to learn from this week, but it just didn’t seem like it was that far off,” Morikawa said. “It really wasn’t.”

He really was right.

This was different from Scottie Scheffler, who had a six-shot lead at East Lake last year when the birdies dried up early. His lead was gone in seven holes, and then it was a fight to the very end with Rory McIlroy in the Tour Championship.

And it was different from Johnson at the HSBC Champions. His lead was down to three shots at the turn and this is what made that so bizarre: He didn’t miss a fairway with his driver the rest of the way and still lost.

Vijay Singh can appreciate what Spieth was saying. He was six behind Sergio Garcia at Quail Hollow in 2005, Garcia’s lead was two at the turn and Singh wound up winning a three-man playoff.

Singh had said he thought a 66 might be enough, and he was right. But he was asked what made him think if he shot 66 that Garcia would do no better than even-par 72.

“Sometimes it’s harder to play with a big lead,” Singh said that day. “Instead of trying to win the golf tournament, you don’t want to lose it.”

No blown lead will ever be as famous as Greg Norman’s at the 1996 Masters. Shocking? Yes. But it was a slow leak that day. Norman was only two ahead at the turn and bogeyed the next two holes. And then the engine blew with his shot into Rae’s Creek at No. 12.

Morikawa has experience with this. He lost a five-shot lead at the end of 2021 in the Hero World Challenge with a chance to reach No. 1 in the world. He shot 76 and was finished fifth. But he saw no comparisons with Kapalua.

Morikawa is 25 and already had two majors among his six worldwide wins in the 30 months after graduating from Cal. This one will sting, no doubt, but it would be surprising if it lingered for long.

He is willing to put in the work. Morikawa has new coaches for his putting and chipping, two deficiencies that worked beautifully at Kapalua for 69 out of 72 holes. After a short holiday in Hawaii — “It’s not going to be as great, but it will be good,” he said — he gets right back after it with three tournaments in a four-week span.

Rahm wasn’t about to apologize for winning. He did his part with a 63.

“But if the best Collin had shown up today, I wouldn’t have won,” Rahm said. “That’s all I can say.”