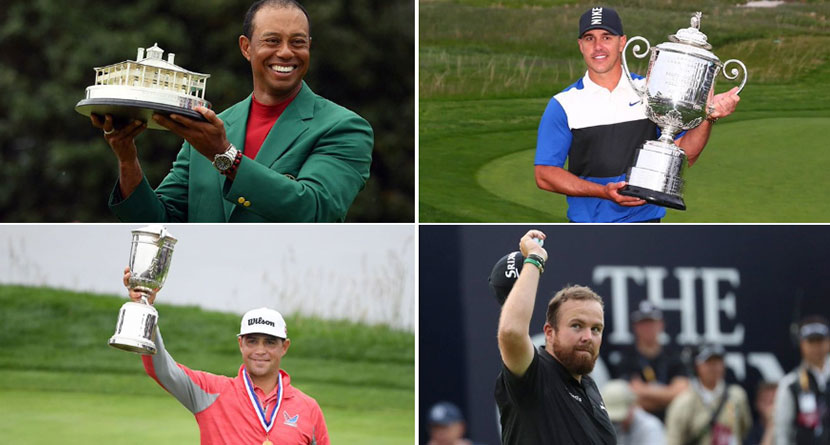 The four major championship victors of 2019 — Tiger Woods, Brooks Koepka, Gary Woodland and Shane Lowry — will all be remembered for different things when the year has faded into golf’s collective memory.

How the major champions themselves will remember it — and what will be considered their most important shots of the tournaments — may not be what you expect, but that’s why America’s golf writer, Doug Ferguson of the Associated Press, is so good at his job.

Ferguson tracked down the winners of the four biggest events of the year and had them explain what were the biggest moments, fondest memories and best shots from each of their respective victories.

The lasting image of Woods’ 15th major championship will likely be one of two things: him standing safely aboard the 12th green on Sunday while his playing partners Francesco Molinari and Tony Finau were on the other side of Ray’s Creek playing their third shots or behind the 18th green embracing his family.

Instead, Woods goes back to what may seem like an innocuous moment late in the round. After taking the lead with a two-putt birdie on the 15th hole, Woods stuffed an 8-iron on the 16th hole to make another birdie. That wasn’t the shot that was the biggest to him, however; it was the next one.

Woods remembered in 2005 when he made the iconic chip-in birdie on the 16th green that he bogeyed his next two holes to fall into a playoff.

“That was one of the reasons why I was so focused and I didn’t celebrate after I made that birdie on 16,” Woods said. ”Because I’ve been in that situation before.”

As a result, it was his drive on 17 that was the biggest of the tournament for him.

”That was the best shot I hit all year,” Woods said. ”Considering the moment, I needed to pipe that ball. I did. I gave it a little more than normal and hit a flat fade. And I think that was what allowed me to go on to win.”

Brooks Koepka’s fourth major title was perhaps the one in which he faced the most adversity. Entering the back nine with a big lead, Koepka nearly lost it as he bogeyed four straight holes from Nos. 11 to 14.

Koepka points at a bogey save to kick off the skid as his most memorable moment. Ballooning his lead to six strokes with a birdie on the 10th hole, Koepka’s approach into the par-4 11th hole. After finding a fairway bunker off the tee, Koepka was forced to layup and then spun a wedge off the front of the green.

He then hit his fourth shot eight feet past the hole, eventually holing a putt that he says was big for him in the moment.

“You drop two shots and everyone goes, ‘Oooh,'” Koepka explained. “A bogey, you wouldn’t think it (was that big of a deal). That was a big putt there.”

Gary Woodland had a couple of Sunday shots that will go down as the signature moment of his first major victory — his 3-wood into the par-5 14th hole or his chip across the green at the par-3 17th, but Woodland harkens back to a fairway bunker shot he early on Saturday as the moment of the tournament for him.

In a fairway bunker off of the second tee on Saturday, Woodland was faced with the ball above his feet and a great swing required to find the putting surface. Taking an 8-iron, he hit the shot to 10 feet. He didn’t make the putt, but he didn’t give any strokes back either.

“The best swing I made all week,” Woodland said of the shot. “So much could have happened there. If I made bogey or double bogey there, I lose my lead early, who knows what happens the rest of the week? That shot gave me confidence that I could hit any shot under pressure.”

That shot led to a 2-under par 69 and set him up for his coronation on Sunday, holding off Koepka to win by three.

Shane Lowry’s major championship breakthrough at Royal Portrush will be remembered for his Saturday 63, but the Champion Golfer of the Year has been very candid about his feelings going into Sunday at the Open with his big lead.

Similar to Woodland, it was a shot early in the round that he pulled off that gave him the confidence later in the round to finish off the biggest win of his life, and similar to Koepka, it was a bogey that stands out.

Playing ther par-4 8th hole in wind and rain, Lowry hacked a 5-iron out of the rough right of the fairway and onto the green.

“I hit the green with a 5-iron, and that was the best shot I hit all day,” Lowry said. “I three-putted from 60 feet, but that had the potential to be a bit of a disaster. It was a dodgy enough lie. The ball was way above my feet, the wind was howling. Miss left, that could be dead. There was a bush on the right if I didn’t carry it.

“I hit some lovely shots that day, but it was a key shot in the final round.”

The moment that sealed it for Shane Lowry, a dream turned into reality for the Irishman ?? #TheOpen pic.twitter.com/QbsgNbGtW6