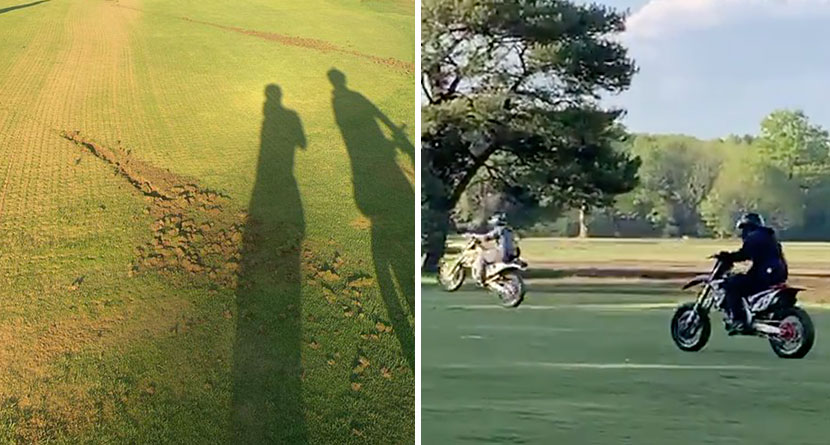 With golf courses across the United Kingdom shut down in an effort to stem the spread of the coronavirus outbreak, Walton Heath Golf Club, host of the 1981 Ryder Cup and the 2018 British Masters, was subject to a cruel form of vandalism on Sunday.

The club tweeted out a video on Monday morning of four motorcyclists riding around a fairway and green complex of the Surrey, England course to the dismay of the videographer and others enjoying the closed course as a park of sorts.

“Unfortunately, as you may have seen, Sunday at around (6:45 p.m.) we were subjected to vandalism by motorcyclists on the course,” the club said in a social media post. “This (video) has been taken to the police who are investigating, but if anyone has any info, please contact the club or the Surrey Police. We thank you for your support.”

Unfortunately, as you may have seen, Sunday at around 18.45, we were subjected to vandalism by motorcyclists on the course. This has been taken to the police who are investigating but if anyone has any info, please contact the club or @SurreyPolice. We thank you for your support pic.twitter.com/rRXumDsBRT

Ranked No. 90 in Golf Magazine’s Top-100 Courses in the World, Walton Heath was most recently on worldwide display two years ago when Justin Rose hosted the British Masters on the parkland course.

“When I saw it, I was really dismayed,” Rose told The Telegraph. “Walton Heath is a place that is dear to my heart, having played there many times as an amateur and, of course, hosting the British Masters there in 2018. I don’t really understand mindless vandalism like this.”

Course manager Michael Mann said that a few members of the greens staff were finishing their shift when they heard the motorbikes on the course.

“Some of our green-keeping team, who were just finishing their shift at 6.30 p.m. last night, heard the motorbikes and ran out in time to see the bikes on the first fairway and green of the New Course,” Mann said on Sunday. “We contacted Surrey Police, who confirmed that this was criminal damage and informed us that they would be investigating the incident.

“They performed ‘donuts’ and ‘wheelies’ on the green and fairway, causing turf to be ripped up. Thankfully, we have a turf nursery and three of our team spent about five hours this morning repairing the damage.”

Unfortunately we were subject to some vandalism on Sunday. Words fail me sometimes. Skidding motorcross bikes over greens causing huge damage, at a time where they shouldn’t even be out. If you know who they might be please get in touch with @SurreyPolice or @waltonheath_gc pic.twitter.com/O6ffrJg5LL

Eddie Pepperell, the winner of the 2018 British Masters at Walton Heath summed up the vandalism as only he could – with humor and candor.

“The way my mind works, my initial thought was that maybe these prats had taken the fact that the first on the New Course is a ‘driveable’ par four a little too literally, but this is no laughing matter,” Pepperell said.

“Unfortunately, you’re always going to get idiots like this. I guess it wouldn’t have happened if the course was open, because there would have been people on there to stop them. But having said that, that’s not an excuse for the lockdown to be lifted with regards to playing golf.”

An investigation into the four motorcyclists to blame is underway by the Surrey Police.