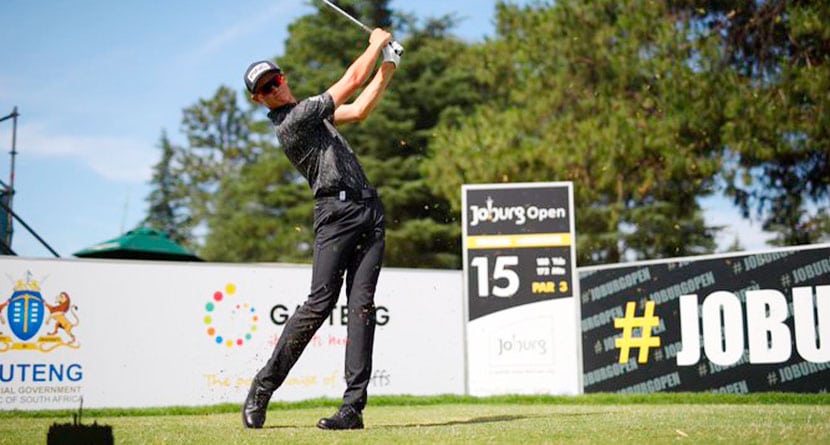 One thing Bryson DeChambeau’s foray into incredible distance gains has foreshadowed is that many experts believe this will become the future of the game. As it turns out, the future is now.

While DeChambeau leads the PGA Tour this season in average driving distance at 337.8 yards this year, even his longest poke of the year has nothing on what South African Wilco Nienaber unleashed on Thursday at the Joburg Open.

Nienaber, who leads the European Tour with a 336.89-yard average, let loose on the par-5 fourth hole at Randpark Golf Club smashing a drive 439 yards en route to an eagle.

“Oh my goodness,” the announcer gasped. “That is borderline obscene.”

Golf.com’s Nick Piastowski summed up the drive with a series of mind-blowing stats:

Nienaber, who teed off on the 10th tee, made five birdies, an eagle and two bogeys on his first nine, but he was unable to pay off the mammoth drive with a second eagle, lipping out and settling for birdie en route to an opening-round 63, which gave him a share of the first-round lead.

“On 4, I had a decent drive,” Nienaber said after the round. “I hit a really good approach and couldn’t trust my first instinct on my line. I saw center-left and when I hit it, I was going right, so I made a birdie, which is alright.”

Longest on the European Tour?

The 20-year-old turned pro last year and his best finish in a Tour event is fourth. A first-round lead and the comforts of playing in his home country have him in position heading into the weekend to post his best finish and even capture his first victory.

“Eight under is nice around any golf course and to do it here in the first round of the Joburg Open, being back home again, is great,” he said. “I haven’t played much in South Africa since I turned pro but it’s been great to be home. I’m just looking forward to the next three days.”