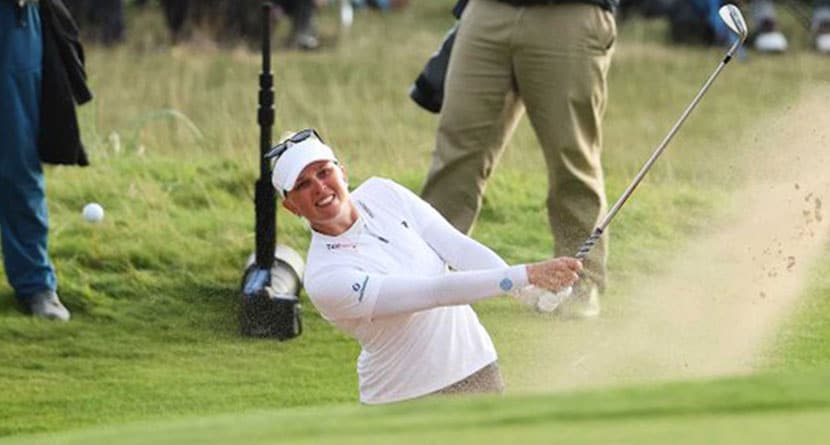 The 18th hole at Carnoustie is one of the most demanding closing holes in championship golf.

Featuring a fairway that is bisected and framed by the Barry Burn and a green that has out of bounds uncomfortably close left and long of the green, there is not much room for error on a hole that routinely carries the most pressure in a tournament.

Of course, when you think of Carnoustie in general, and the 18th hole in particular, the name Jean van de Velde and the 1999 Open Championship springs to mind for all the wrong reasons. Van de Velde infamously came to the 72nd hole holding a three-shot lead and used all three strokes he had in reserve en route to a playoff loss to Paul Lawrie.

Carnoustie’s closing hole added another name to its infamous history on Sunday at the AIG Women’s Open: Nanna Koerstz Madsen.

The 26-year-old Dane came to the final hole of the championship tied for the lead with her playing partner, Anna Norqvist. What happened next was Van de Vele-ian.

Playing first, Nordqvist found the putting surface in regulation, some 30 feet from the hole. Koerstz Madsen couldn’t match her, however, fanning her approach onto the downslope of the right greenside bunker. Facing a difficult shot in recreational conditions, Koerstz Madsen introduced the hosel of her wedge to her golf ball, nearly sending it OB and dooming her championship hopes.

She would hit a deft chip from the hay behind the green to give herself a 10-footer for bogey. However, by the time she hit the putt, the result had been decided as Nordqvist had lagged her birdie putt to a few inches from the hole.

Koerstz Madsen missed the bogey putt and fell from a tie for the lead into a tie for fifth place, the difference in $636,236.

“I was nervous all day,” Koerstz Madsen said. “Did really well in trying to still hit good shots, trying not to make mistakes and on 18, I tried to not make a mistake and that was the only thing I shouldn’t do.

“I’m really proud. I had a chance all the way till 18, also on 18 fairway. So I haven’t even had a chance on the back nine on a Sunday yet, so I’m very pleased and I now have a way to get there, and I just need to finish the last hole, as well. I’m really proud of what I’ve been working on and I do believe that it’s going to come in the future.”

As a consolation, Koerstz Madsen was announced as a captain’s pick for the upcoming Solheim Cup the first week of September.